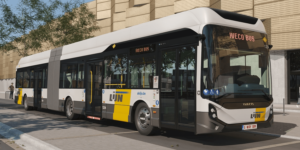 In the Belgian region of Flanders, Iveco Bus has signed a framework agreement with Flemish public transport company De Lijn for the delivery of up to 500 electric buses by 2030. The contract initially includes a firm order for 65 all-electric E-Way city buses in the articulated bus version.

The new Iveco Buses are to be used in several cities in Flanders from 2024. The framework agreement with Iveco is part of De Lijn’s procurement process, which started at the end of March 2022. The Flemish public transport company intends to purchase up to 1,250 electric buses with lengths between 8.5 and 24 metres.

The newly-signed framework agreement secures De Lijn access to Iveco buses. The manufacturer explains that when they are put into operation, the 65 18-metre articulated buses already ordered will become the largest fleet of Iveco articulated buses. Iveco says it has already delivered more than 800 E-Way buses so far, which have already covered a total of 42 million kilometres.

Iveco offers electric buses of the E-Way series in four different lengths with different charging options, for example, wired charging overnight but also fast charging via pantograph with a current collector on the vehicle roof. The two companies have not yet revealed exactly which variant De Lijn has chosen for the articulated buses.

Iveco Bus recently signed a framework agreement with the public transport operator Busitalia for the delivery of up to 150 E-Way. Deliveries to several Italian cities are planned for the period between 2023 and 2025.