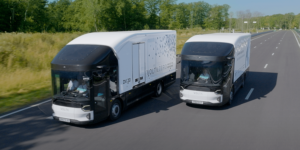 Swedish electric truck start-up Volta Trucks has confirmed that customer orders have been received for the first 300 production slots of its all-electric Volta Zero. This equates to more than 85 million euros in sales generated as a result.

These firm orders relate exclusively to the 16-tonne variant, which is scheduled for production and delivery to customers in 2023. Series production of the Volta Zero is scheduled to start at the beginning of the second quarter of 2023 at the manufacturing partner in Steyr, Austria.

Although production has already been underway since September 2022, so far only second-generation prototype vehicles have been built for product validation. These vehicles are technically already very close to the series models and are also used in the pilot fleet for real tests at customers. Since the actual production vehicles are built according to customer specifications, they can differ slightly from the validation vehicles.

It is not clear from the announcement which customers have now placed binding orders for a total of 300 vehicles with a production slot – Volta Trucks will publish “customer-specific details” at a later date. Volta Trucks has already made its first customers public: In November 2021, an order for 1,470 vehicles by DB Schenker was announced. This was followed by Petit Forestier’s order for 1,000 Volta Zero vehicles.

What makes Volta CEO Essa Al-Saleh particularly pleased about the 300 orders: “This covers a meaningful portion of our 2023 production targets, before customers have pilot tested the vehicles,” says Al-Saleh. “This is a major achievement and demonstrates the compelling features of the Volta Zero and the trust that our customers have in our ability to deliver.”

In total, Volta Trucks now stands at 6,500 pre-orders. However, this figure refers to all markets and all models, so it also includes orders for the 19-, 12- or 7.5-tonne truck, even if they are not even built yet. What is clear, however: New pre-orders have no longer been made on a larger scale, as with DB Schenker or Petit Forestier, because in April 2022 Volta Trucks had already given a figure of around 6,000 vehicles.