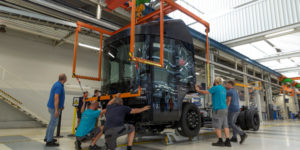 Steyr Automotive has produced the first Zero vehicle for Volta Trucks at its plant in Steyr, Austria. It is the first unit of Volta’s second prototype generation now out for product validation in a pilot fleet. The vehicles in this fleet will be loaned out to customers for an extended period of time in late 2022 and early 2023.

Briefly, the Swedish electric truck start-up Volta Trucks had selected Steyr Automotive, formerly MAN Truck and Bus Austria, as contract manufacturer for its Zero last year. The Austrians were appointed at the time “due to their extensive experience in commercial vehicle construction, the existing manufacturing infrastructure and the resulting fast time to market” – according to Volta’s original statement in September 2021.

In the meantime, there is also a timetable for the planned “fast market introduction”: the start of series production of vehicles according to customer specifications is planned for the beginning of 2023. Steyr Automotive is providing Volta Trucks with a manufacturing capacity of 14,000 vehicles per year. The production contract has a value of up to 1 billion euros over the entire term, Volta Trucks informs.

Kjell Walöen, co-founder and Chief Manufacturing and Logistics Officer of Volta Trucks, said: “This first vehicle rolling off the line at our manufacturing plant in Steyr is the latest significant milestone on the Volta Trucks journey towards the start of production of customers’ vehicles. To have achieved this significant landmark in just 12 months is a testament to the pace that we are working at to deliver the safest and most sustainable trucks to urban streets, and the excellent collaboration we have with our partners at Steyr Automotive.”

The Swedish company has set itself the goal of selling more than 27,000 vehicles per year by 2025. In the following years, the sales figures are to increase further. Volta Trucks has already announced its first customers: In November 2021, an order for 1,470 vehicles by DB Schenker was announced. This was preceded by Petit Forestier’s order for 1,000 Volta Zero vehicles.

The Volta Zero is a sustainable electric truck for inner cities. First unveiled in 2020, the 16-tonne concept is designed from the ground up for electric mobility and – with its large windscreen and numerous assistants, for example – optimised for urban use and distribution traffic. According to earlier information, the electric drive systems are to come from Meritor and the batteries from Proterra. Subsequently, it became known that Volta is planning versions in the 7.5-tonne, 12-tonne and 19-tonne weight classes in addition to the 16-tonne truck. The company has now presented the two smaller models.

Meanwhile, the launch in Europe will not be the end of the story. In May, the electric truck start-up announced an expansion into the USA. Accordingly, the company will initially introduce a pilot fleet of one hundred 16-tonne Volta Zeros (Class 7) in the USA in mid-2023. They will be evaluated by customers in Los Angeles and later in other cities. US series production of the vehicles is planned from 2024. The introduction of the Class 7 Volta Zero is to be followed by the US Class 5 and Class 6 variants, corresponding to the European 7.5 and 12-tonne models, in 2024 and 2025 respectively.

Solectrac to expand dealer network in the USA