British outsourcing firm Mitie has signed the Clean Van Commitment, thus promising to ensure 20% of its small van and car fleet is electric within the next two years. With Mitie joining the initiative, hundreds of electric vehicles will take to the roads.

The Go Ultra Low campaign released figures on registrations of electric and plug-in hybrid vehicles today and they are looking good. In fact, the overall number of PEVs has risen each and every month this year, with one being registered every 9 minutes in the UK. 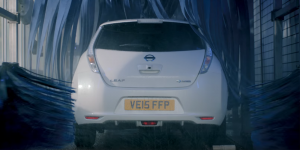 Phone to EV charging network? Korea’s KEPCO has kicked off a pilot programme in Busan to test whether telephone poles can be converted to charging station with three types of charging. If it works, it could make plugging in in South Korea much easier.
koreaherald.com, just-auto.com

UK goes electric: The Go Ultra Low campaign in Great Britain estimates that more than 1.3 million electric cars will be newly registered there every year. If their forecast is right, electric power could become the leading form of propulsion on the Iles by 2027.
telegraph.co.uk

Cheaper home chargers: Chargemaster is making Mitsubishi Outlander PHEV drivers in the UK a special offer, selling their domestic charging point package for 149 pounds. That’s up to 205 pounds less than what the units are typically sold for. Installation is included but must be completed by October 31st.
evfleetworld.co.uk

Tesla has fasted charger: Ecotricity had complained about Tesla saying that it had the world’s fastest charger currently available, a claim that was now confirmed by the Advertising Standards Authority in the UK. The ASA also accepted calculations for savings that Model S owner would have as being based on realistic petrol and electricity prices.
arstechnica.com

Up to 1.3m electric vehicles could be sold annually in the UK by 2027, the Go Ultra Low campaign projects as it considers the turning point as overcome. If growth indeed accelerates, all new cars on the isles could be electric by 2040, the report says.
autoexpress.co.uk

China charging update: China’s plan to roll-out a nationwide charging-station network (we reported yesterday) is taking on shape. 12,000 EV charger stations, half of them fast-chargers, are to be installed by 2020. The first 1,888 rapid-chargers shall stand by June 2016 already.
xinhuanet.com

Green Gate: At Frankfurt Airport the first Green Gate has opened as part of the E-PORT AN initiative. At gate A15, passengers can inform themselves about the airport’s various e-mobility projects. Fraport, Lufthansa, the State of Hesse and the Rhine-Main model electro-mobility region are partners in the initiative.
aviationtribune.com

The Go Ultra Low City Scheme enters the next stage as the 12 cities shortlisted earlier this year have handed in more detailed bids. Proposals range from car scrappage schemes over street lights doubling as EV charge points and the electrification of council fleets.
fleetnews.co.uk, businessgreen.com

New e-bike legislation: California Governor Jerry Brown signed a bill that clarifies types of electric bicycles in the state. It introduces a distinction between e-bikes with motor support up to 20 mph, which are now allowed on cycle paths, and speed pedelecs (up to 28 mph). Also, e-bikes are no longer classified as mopeds.
electricbikeaction.com

The UK’s Go Ultra Low campaign has come up with a fun approach to promote PHEVs, pitching a dad’s doubts against his teenager’s better knowledge. The latter shows what it means to drive electrically. After all, “is instant acceleration ‘pfffff’?” We are afraid not.
youtube.com

Five E-buses for Münster: VDL Bus & Coach has delivered five Citea Electric buses to the German city of Münster. These are funded via the projects SEB (rapid-charging systems for electric busses in public transportation) and ZeEUS (Zero Emission Urban Bus System). The charging capacity reaches up to 500 kWh, meaning the buses can be fully charged in 5-10 minutes.
newstix.de (in German)

Little’s adds Lexus GS300h: The five limousines are the first hybrids on the fleet of the British chauffeur service. The company is confident that the Lexus will be a strong selling point since more and more clients “place an emphasis on environmental performance and sustainability”.
fleetnews.co.uk

Cheaper charging: Transport Evolved looks at how grid-connected energy storage systems can help businesses offering rapid-charging at a lower cost. It takes the Shore Hotel in Santa Monica, USA, as an example, which has added both a CHAdeMO station and an innovative energy storage system.
transportevolved.com

Do not disturb: Similar to signs to hang on a room door in a hotel, these Take Charge and Go EV Charging Hangers aim to help improve charging etiquette. By letting others know whether it is ok to unplug one’s vehicle when it is fully charged, others can begin charging without you having to come back and unplug your car yourself.
greencarreports.com

Route to happiness: 70 percent of people questioned for a survey by Go Ultra Low believe that a quieter cabin could help keeping the driver and passengers happier. In other words, hybrids and electric cars could help reduce stress and improve one’s overall mood.
puregreencars.com

London buses to charge wirelessly: Transport for London (TfL) announced to start operating three inductively charging buses in the British capital this September. The buses are part of the European ZeEUS project and follow a successful trial that has taken place in Milton Keynes for six months.
eltis.org

Go Ultra Low cities: The British government shortlisted 12 cities to potentially share 35 million pounds of funding to further the use of ULEVs. London, Oxford, York, and Dundee, to name but a few, have until August 31, 2015, to finalise their submissions. The winners will be announced shortly after.
fleetnews.co.uk, nextgreencar.com

New Hampshire offers rebates of up to 12,000 dollars for the installation of a DC fast chargers on the Interstate 93, available through April 3. Rebates of up to $5,000 for Level 2 chargers will be available later for other locations. In total, 49,000 dollars in funding are offered for fiscal years 2015 and 2016.
miamiherald.com

Dutch Tesla Service Center: The Californian company has opened one of the biggest European service facilities in Amsterdam. The Drivers Lounge offers Dutch Model S drivers 24-hour-access, “in case you need a coffee at 3 am”.
electrek.co, twitter.com

Japan to support Georgia: The capital Tbilisi is to receive 500 million yen (4,1 million dollars) towards the acquisition of hybrid buses and two electric cars. While for the greater good, the funding is also a way of promoting Japanese technology abroad as all vehicles will come from Japan.
messenger.com.ge, agenda.ge

Kia fast chargers in Europe: The Korean manufacturer installed its first two DC chargers at its European HQ in Frankfurt, Germany. The 100-kW multi-system stations have been developed by Korean Signet Systems. Kia plans another 233 charging stations in Europe which will accompany the introduction of the Soul EV later this year.
elektroniknet.de (in German)

The UK government announced the winners of its 5-million pound Clean Vehicle Technology Fund (CVTF). 17 councils will be sharing the money to “green” all sorts of vehicles. Southhampton City Council alone gets 351,900 pounds to equip 23 buses with flywheel technology. Newcastle does the same but for 30 buses while Portsmouth will hybridise 18 vehicles.
businessgreen.com, gov.uk (pdf with all projects)

Go Ultra Low: Another UK project is this campaign from government and industry that strives to educate and enthuse motorists on the benefits of ultra low emission vehicles (ULEV). For those want to get on board, the SMMT has compiled the most important ingredients to go ultra low.
smmt.co.uk

Supercharger update: Tesla has just erected three new European charging sites. One Supercharger each now awaits Model S drivers close to Frankfurt and Neuberg, Germany, another one stands in Danish Køge. The latter is rumoured to become the biggest in Europe with 12 spots, solar panels and energy storage, according to the German Tesla forum. But also in its home state, the company does not rest and erected another Supercharger site in Cornwall.
teslamotors.com (Germany), teslamotors.com (Denmark), tff-forum.de (in German), choosecornwall.ca (California)

Charging experience: Tyrel Haveman went on a 1,500-mile trip from Canada to California with his Nissan Leaf and gives an interesting account of the various network operators. He mostly used DC quick chargers that line the West Coast Electric Highway which curiously cuts off in California.
insideevs.com