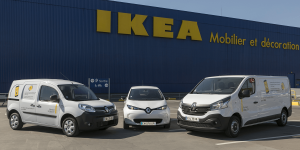 Renault Pro+ Commercial Vehicles have launched a new line of offers that includes a deal for the electric Kangoo Z.E. van. When handing in any old van, clients in the UK may get 2,000 pounds off the price of a new electric van.

Long electric buses for Vienna: The Austrian capital is looking to modernise its public transport fleet and kicked off a second tender. The result will be announced in spring 2017, and will for the first time include 12-metre buses with electric drivetrains. How many was not announced.
wien.gv.at (in German)

Kangoo Z.E. with H2 range-extender: About a year ago, three British companies came together to offer fleet operators a Renault transporter with fuel cell range extender (we reported). Some 32 models have already been sold, also because the REx adds an extra 400 km of range.
gasworld.com

Toyota Mirai international: Europcar UK has added the fuel cell vehicle to its fleets of its newly acquired Brunel chauffeur business, using money from the recently received Office of Low Emission Vehicles grant. Meanwhile, Toyota is looking to offer a few units of the Mirai in United Arab Emirates, now that Air Liquide has been charged with setting up a first H2 fuelling pump in Dubai.
fleetnews.co.uk (Europcar), albawaba.com (UAE)

EV quota for government agencies: The Massachusetts Senate passed a measure requiring a quarter of all new vehicles purchased for [some] government agencies to be electric by 2025. The new bill also lays the foundation for cities to dedicated parking stalls for EVs only.
wickedlocal.com

Kansas eyes EVs: Kansas City International Airport is looking to purchase four electric buses from BYD. A final decision, however, won’t be made until after Thanksgiving, so in the last week of November.
kansascity.com