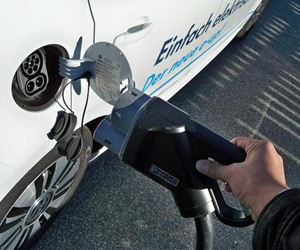 VW’s electric plans: According to German Autozeitung, the new VW Polo, announced for March 2017, will also be available as a purely electric variant. The new VW Phaeton will follow in June 2017, including a plug-in hybrid version. The Phaeton W12, however, will only be offered as a mild-hybrid. Due to recuperation technology, the car will be eight percent more fuel efficient than its predecessor.
autozeitung.de (in German)

Tesla Model 3 update: According to Autocar, Tesla will take the wraps off its Model 3 at a special event in March 2016. The EV is said to have a range of up to 300 miles on a single charge and is expected to go on sale in mid-2017.
autocar.co.uk

E-Porsche at IAA? French L’Automobile reports that Porsche will be presenting an all-electric concept car at the Frankfurt Motor Show in September. The study will supposedly preview the upcoming Porsche Pajun, short for Panamera Junior.
automobile-magazine.fr (in French), greencarreports.com

Hybrid surprise: Images of the upcoming reincarnated Renault Alpine emerged on the web, showing that the sportscar apparently features plug-in hybrid technology. The camera spied a red button up front on the hood, marked with a voltage sign. The Alpine’s launch has been pushed back to 2017.
worldcarfans.com, car-boom.com

Borgward teases SUV: Lifting the cover ever so slightly, Borgward teased its first car in 54 years – a SUV that it will completely unveil at the IAA in September. A plug-in hybrid version will also be available.
motoring.com.au

Gogoro delivers first scooters: Over the weekend, Gogoro delivered its first pre-ordered electric two-wheelers to customers in Taipei. The company also has 65 charging stations in Taipei. Overall, Gogoro says, it received 400 pre-orders and aims to build a scooter network across the world.
fortune.com, recode.net