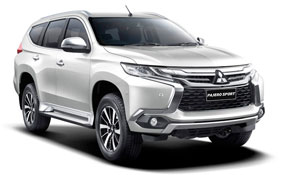 Mitsubishi has unveiled the new Pajero Sport, putting an end to previous rumours. The 2016 version of the SUV could also be offered as a plug-in hybrid variant. Just like the Outlander PHEV, the Pajero will most likely have an electric range of around 50 kilometres.
indianautosblog.com, carscoops.com

Tesla autopilot update: Elon Musk announced two improved functionalities of the Californian EV maker’s self-driving technology on Twitter. Both, the ‘highway autosteer’ and ‘parallel autopark’ will be added via software update at a yet to be specified date.
electriccarsreport.com, puregreencars.com

Escaping bankruptcy: Dutch Spyker has officially exited bankruptcy protection by merging with electric plane producer Volta Volaré (we reported). Since Spyker’s failed attempt to take over Saab in 2010, the (electric) sports carmaker has had financial problems, which it now believes to be over.
autoblog.com, motoring.com.au

Electric folder in XS: The 12-kilo A-Bike Electric claims to be the lightest electric folding bike out there and it sure is the smallest. While compact to fold, its 8 inch wheels make it a last-mile solution only. Nevertheless, Kickstarters believe in it.
treehugger.com, kickstarter.com (campaign)

Fees for EVs: The U.S. Senate is fighting for its long-term transportation bill to pass. The new proposal suggests user fees on electric vehicles to be invested in road maintenance, which is usually funded through federal gas tax revenues.
autoblog.com

Increased EVailabilty: Kia is expanding its EV specialist network in Great Britain. Six additional stores in Eastleigh, Romford, High Wycombe, and Milton Keynes as well as in Barnsley and Dukinfield are now qualified to sell the Soul EV.
carsite.co.uk