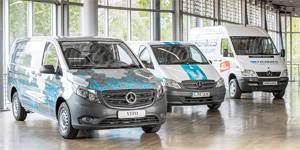 Strategic transport partnership: Mercedes and courier Hermes have finalised their previous agreement to make deliveries emission free. Hermes wants to deploy 1,500 electric Mercedes Sprinters and Vitos, first in Stuttgart and Hamburg but later nationwide. At the signing ceremony, they further detailed the deal. It includes plans for infrastructure for logistic hotspots, where the batteries assembled in Daimler subsidiary Accumotive’s new facility will be charged. The electric drives have been specifically developed by Mercedes to electrify its van business, which will also receive another 150m euros over the next few years. daimler.com, electrive.net (in German)

Jeep offensive: The outdoor brand wants to offer hybrid versions of most of its eight models, FCA CEO Marchionne announced. The leap into electric terrain is to take place within the next 2-3 years, so it looks like the Yuntu PHEV, displayed in Shanghai, was more than just a concept to test the waters.
marketwatch.com

Lambo likes it large: The Urus SUV by Lamborghini will have 650 hp under the hood. A first production run will see an initial 1,000 units hitting the road next year but Lambo plans to scale up to 3,500 pieces annually. By 2019, the Urus will also come as PHEV variant featuring the same V8 engine.
autonews.com

Spyder up close: The upcoming roadster BMW i8 has been caught on camera and bared almost all, or at least parts of its convertible new side. The innards of the super hybrid are expected to be stronger comes 2018, when a 380 hp engine will be combined with a bigger battery pack.
carscoops.com

Korea gets Kia Niro PHEV: Kia has begun to serve its local market, where it launched the dedicated plug-in hybrid as planned. The Niro went on sale for 33m Won (about 27,000 euros). Europeans will have to wait until autumn for the PHEV and Kia has scheduled an all-electric version for 2018.
yonhapnews.co.kr

Changan too bets on domestic buyers and just announced an electric version of its compact SUVs CS15, that will launch in China later this year. The Changan CS15 EV entails 55 kW and has a said range of up 300 km.
carnewschina.com