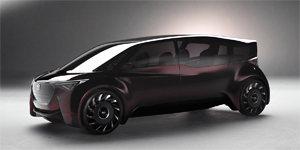 Fine fuel cell concepts: Toyota will showcase hydrogen concepts at its home run in Tokyo this November. One is the Fine Comfort Ride, itself a carrier of not only fuel cell technology but autonomous driving capability as well. Its drives sit in the wheels and a load of hydrogen is said to last for a 1,000 kilometres while the sleek mini van can transport up to six persons. Also on display in Japan’s capital will be the Sora, Toyota’s first ever fuel cell bus that is set to go on sale next year. More than a 100 Sora are also booked to chauffeur visitors during the 2020 Olympics around Tokyo and will likely leave a lasting impression with their LED lights and stereoscopic shape.
carscoops.com, toyota.co.jp (Fine-Comfort Ride), carscoops.com, toyota.co.jp (Sora)

Polestar part 2: 640 million euros have been freed by Geely and Volvo to bolster their electric Polestar label. And that is only for the first phase which includes setting up production in Chengdu China. Five all-electric models are scheduled for launch throughout 2021, following the Polestar 1 PHEV (we reported).
electriccarsreport.com, media.volvocars.com

Is this the Leaf SUV? Could be, after all it is expected to make an entrance at the Tokyo Motor Show later this month. A short teaser film evokes a sense of silhouette but is otherwise dubbed to outline “the future of Nissan Intelligent Mobility.”
youtube.com via insideevs.com, autoblog.com

No credits for Model 3: Supercharging was never supposed to be free for those opting for the economy Tesla or at least not entirely. Turns out, that fast-charging will cost from day one as the annual credit of 400 kWh Model S and X users get nowadays won’t apply to the Model 3. The credit translates to about 4 – 5 full charges or 1,500 kilometres so future Model 3 drivers better hope for that new CCS plug we mentioned a few days ago.
electrek.co

Faster charging and more range are the two outstanding features of Zero Motorcycles’ 2018 series. Batteries now come with 10 percent more capacity and there is the option for a range-extending Power Tank that can deliver a city range of more than 200 miles. New too is the 6kW Charge Tank that increases charging time at a standard household outlet sixfold.
motorcycle.com, carolenash.com

Van Hool goes exquisite with its first 24 metre electric bus powered by IMC technology from Kiepe Electric. The EXQUI.CITY T that is on show at the Busworld in Belgium can thus hook on the overhead wire where available but also roam freely on battery power.
automotiveworld.com, knorr-bremse.de