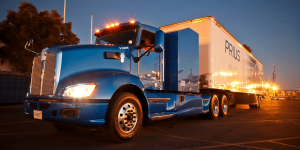 Toyota wants to add several utility vehicles based on fuel cell tech to its line-up, according to Japanese business daily “Nikkei”. In this context, the carmaker just closed a deal with supermarket chain Seven-Eleven.

Thus, from 2019, Seven-Eleven will deploy specialised H2 trucks made by Toyota to carry goods to its stores. The Japanese carmaker is known for betting on fuel cell tech. Another prove is that, it currently tests a 36-ton commercial fuel cell truck in California. Moreover, Toyota intends to provide more than 100 units of its recently presented fuel cell bus concept Sora for the 2020 Olympic Games in Tokyo.

The bus is equipped with a system that was initially created for the Mirai. It features two fuel cell stacks, two motors as well as 10 hydrogen tanks and is able to absorb five times the H2 amount on the Mirai.

However, Toyota is not shutting itself off to electric-powered mobility. As reported, it set up an EV joint venture with Mazda and Denso in September. Called EV Common Architecture Spirit, the new company – that is largely owned by Toyota with 90 percent shares – is to boost the development of various types of electric vehicles, including the full range of compact cars over to light trucks that may also become available as fuel cell vehicles.

In December, the carmaker announced to bring more than 10 all-electric vehicles to the global market in the early 2020s, while battery investment is likely to exceed 11 billion euros (1.5 trillion yen) through 2030.
asia.nikkei.com