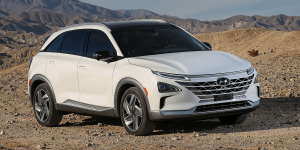 In the spotlights of the CES, Hyundai has taken the wraps off its second-generation fuel cell SUV and revealed that it is going to be called Nexo. The carmaker also published further tech specs, thus the model’s range will be 500 miles (800 km) according to NEFZ.

The new H2 car is the successor of Hyundai’s iX35 Fuel Cell and shall be launched before the year’s end “in select markets around the world”.

Nexo’s fuel cell powertrain reaches an efficiency of 60 percent and provides 20 to 30 percent more power compared with the ix35 Fuel Cell. The SUV’s range of 800 km is 30 per cent more than its predecessor. The motor’s output accumulates to 120 kW (163 PS), making the Nexo capable to accelerate from 0 to 100 km/h in 9.5 seconds (ix35 Fuel Cell: 12.5 seconds). Moreover, Hyundai claims that the fuel cell powertrain works properly being even confronted to extreme temperatures of -30 to +50 degree Celsius.

The Nexo is the first SUV made by Hyundai’s engineers, which is particularly designed to meet the requirements of fuel cell tech. So far, the Koreans modified existing models as it has been the case with the ix35 Fuel Cell.
autocar.co.uk, carscoops.com, hyundaipressoffice.co.uk