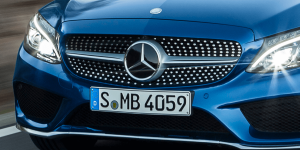 Daimler has a facelift scheduled for the C-Class this March. Once the updated Mercedes sedan takes to the spotlight in Geneva, it will preview a tech revamp that includes two plug-in hybrid variants.

Mercedes modernises its classic and has chosen the Auto Salon in Switzerland for the then fourth-gen C-Class’ debut. Autocar reports the new Daimler is to make its first appearance in saloon and estate body styles, with coupé and cabriolet versions to follow at the New York motor show in April.

Apart from petrol and even diesel engines, mild hybrids as well as PHEVs are to join the motor line-up. The current C350e will be replaced with C400 EQ Power and the PHEVs electric part will deliver 90 rather than 60 kW. Additionally, the C-series will include a diesel-hybrid called C400d EQ Power with an electric range of 50 kilometres.

In case of the UK, all versions are set to hit the shelves from July.