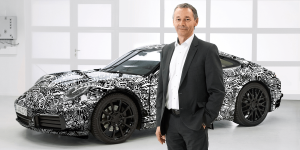 It is Porsche’s most iconic design, the 911 and so it just got another overhaul. While there is still some camouflage wrapped around the next-gen classic, the director of the 911 model line is already thinking ahead and into the future that may be electric.

August Achleitner is the man responsible for continuing the classic 911 series at Porsche and has been leading careful change since almost 20 years. He calls his approach “a certain aesthetic reserve” that “pays dividends” in the long run.

Indeed it has been a long run with the latest update of the 911 being generation 992. It is due later this year and while Porsche insists that this is not an electric sports car, Achtleitner sees an option for electrification in the future. “Two years ago I’d have said no way. Today I wouldn’t categorically rule it out,” he conceded in a feature-like press release from Zuffenhausen.

The head of the 911 line pointed to the upcoming Porsche Mission E to explain his new way of thinking that goes beyond the turbo charged V6. “I drove the prototype of our coming electric sports car, the Mission E, and it was a very compelling experience. And the performance of the Porsche LMP race cars with hybrid drive systems is quite simply sensational,” Achleitner said and added that he could well imagine an electric motor in the 911.

But first things first and for now, Porsche is concentrating its electric efforts on the Mission E that is expected to hit the road in a limited number by 2019. The final design has been released and testing is underway. However, Porsche has already announced having another all-electric model in the pipeline and details may be expected midway through this year (we reported).

Once Mission E sales will have taken off, both Audi as well as Bentley plan to utilise the Mission E architecture for their own plug-ins reportedly. Thus the electrification at Porsche is in fact driving Volkswagen’s EV models as a whole. Porsche’s so-called Premium Platform Electric (PPE) for example is a co-development with Audi and will underpin what its name suggests, electric high end models within the VW family.

Additionally, Porsche renounced all ties with diesel engines and has discontinued the fuming motor variant with immediate effect (we reported).