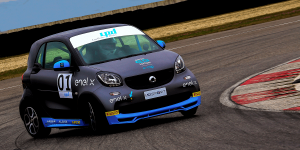 Daimler has announced the Smart EQ ForTwo E-Cup for this year. The race will feature a small series using 16 electric Smart cars in Italy. The races will commence on the 8th and 9th of July with a double race on a street track in Turin.

According to first reports, the electric Smart cars will feature roll-cages, racing suspension and absorbers, as well as racing seats and tires. The weight will be decreased by the re-fitting from 900 to 750 kg. A list of drivers has not been released so far.

Only recently, the German car manufacturer announced the intention to sponsor this years Formula-E race in Rome. The company has multiple reasons for getting involved in the race. For one, they plan to attract attention to their EQ electric brand, as well as a potentially planned entry as a serious Formula-E contender in future.