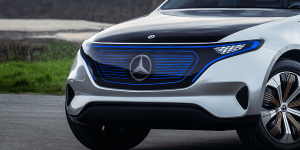 Mercedes-Benz has announced their intentions to further expand their electric brand EQ, next to the EQC in 2019 and the EQA presented at last years IAA, by another electric luxury sedan called the EQS, which will be designed with C-class sizing.

The report cites Michael Kelz, head of development for the EQC, GLC-/E-/CLS-class, who expects the EQC to be fully ready and available by 2020.

The sedan will be an individual model, based on the MEA architecture platform, and will not simply be an electric version of the existing vehicle, in this case the regular S-class. This marks a difference to the other traditional luxury car brands, as Audi and Jaguar both decided to electrify their vehicles instead of redesigning them, particularly with the Audi A8 and the Jaguar XJ. Concerning the name of the new vehicle, Mercedes has been planning the move since 2016, when they reserved the rights to the names EQA, EQC, EQE, EQG and EQS in the UK. Recently the car manufacturer also reserved the naming rights in Canada for the EQ family additions.

When asked whether the new CLS will be offered as a PHEV as well, Kelz opted for a more diplomatic answer stating that there are currently no plans to do so, however it is possible that it may be considered in future. Depending on demand, the company would consider adding a plug-in hybrid system to the CLS. Currently the vehicle is only offered as a mild hybrid.

More likely is the potential addition of a compact electric sedan being added to the EQ brand. Referring to an interview with Christian Frueh, the head engineer for the C-class, there was mention of a compact sedan which would be released in 2022, but would not be another C-class vehicle, but a stand-alone model to be added to the EQ family. The name of the planned car is still unknown.