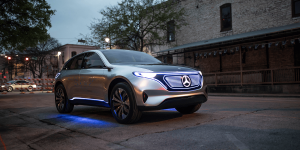 It looks like Daimler might be coming ever later to the electric game as German Handelsblatt cites sources saying the first electric car, the EQC might be delayed with the same being alleged for the electric S-class.

Initially the EQC was to launch in early 2019 after its debut planned this September but sources told the German paper said market entry has been pushed to June 2019. Delays have been reported for the electric version of Mercedes’ luxury flagship, the S-class as well. While it was scheduled to arrive by 2020, it might not be expected before 2021.

Sources claimed shortages in battery supply as reason for both delays. Whilst Daimler would not comment at first, Handelsblatt now received a reply: Daimler is denying any delays.

The carmaker is under pressure on more than one front though with German KBA expecting them to report on diesel emissions. With Bosch having cooperated with investors openly despite (or because of) being the originator of the software that got tweaked, it looks as if Mercedes might have to face its very own diesel gate.

Furthermore, Geely is pushing for cooperation after the Chinese company had bought itself a seat at the boardroom table, as it has become Daimler’s biggest shareholder earlier this year. There had been talks of joint battery production but Daimler has been unwilling so far. Now Geely wants them to deliver motors for Volvo cars, deliberately or not.

While the EQC may be late in Europe, Daimler has been working to increase their EV production facility in China and wants to start making their electric car there before the year’s end reportedly.

Plans of a battery production facility in the People’s Republic were on the table as well. For now though, Daimler has turned to CATL to supply batteries for their EV models. So far, no problems have been reported regarding their battery supply agreement.

Still, Daimler faces a little homemade crisis on top of the allegedly adverse conditions above: CEO Dieter Zetsche is facing the end of his contract next year and must either leave or else convince the board and shareholders that he still got Mercedes’ matters under control.