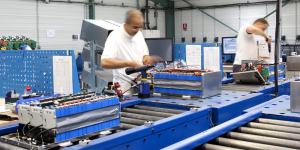 E4V announces the construction of a new battery facility close to their existing site in French Le Mans. The 3,000 sqm plant will triple their assembly of tailor-made battery packs upon completion in May 2019. E4V clients include La Poste.

Founded in 2008, E4V has advanced to a driving force behind the electric vehicle market in France. La Poste and also the mini buses of Mia use battery packs assembled by E4V and their count stands at more than 15,000 units now.

On its Le Mans site, a growing work force assembles cells provided by an unnamed partner based in Asia. They are using lithium iron phosphate (LMP) technology, rather than nickel cobalt blends. E4V also integrates all other elements as they “develop software, algorithms, and design,” says founder and CEO Denys Gounot, for customised solutions.

From a partner for small companies like Mia Electric early on, E4V has progressed to serve large entities such as the mail service in France. They equip the electric tricycles and quadricycles of La Poste on behalf of Ligier and also the vehicles of Aixam or the commercial EV of Goupil.

More unusual commissions include marine application such as batteries for electric boats. They also equipped the Colibus, an electric utility vehicle designed by Helem and built by Univers VE, the company that also owns E4V. DHL in France uses the Colibus reportedly.

E4V is also working on other solutions. “For the past three years, we have been working on the theme of embedded energy for thermal vehicles with electrically powered components, such as pumps,” explains Denys Gounot.

The solution of E4V made it to England even, where they equipped 300 milk delivery trucks with cooling. We wonder if this was in cooperation with StreetScooter that delivered their electric vans to Milk&More and had to adapt the cooling cabin reportedly. We have been unable to confirm this though.