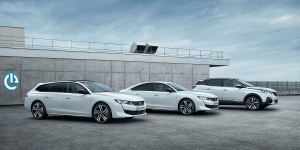 Peugeot presents two new plug-in hybrid drives, that are to turn the wheels inside the new Peugeot 508 and 508 SW as well as the 3008 SUV comes next year. The basic system HYBRID offers 132 kW and the all-wheel drive HYBRID4 is at 147 kW. Peugeot says the range is 50 km for both versions.

The new hybrid drive systems will enable Peugeot to offer plug-in hybrid variants for updates of old models. Both systems are based on petrol and are to become available in Q2 of 2019.

Both are based on the so-called 1.6L PureTech engine that has been adapted to incorporate the new drives. It reaches 180hp on HYBRID and 225hp on HYBRID4.

The engine is combined with the an 8-speed automatic transmission (e-EAT8 for Electric Efficient Automatic Transmission) and linked to a 80kW electric motor on the front suspension.
On the HYBRID4 versions, the multi-link rear suspension is equipped with an inverter, said electric motor and a gearbox for the four-wheel drive. This AWD is destined to serve in the 3008 SUV.

Peugeot says the Zero Emission mode is set as default in all their PHEVs and allows driving with speeds of up to 135 kph.
When braking, drivers may opt for recuperation to increase the standard range of 50 kilometres according to WLTP. The battery has a capacity of 11,8kWh (HYBRID) or 13,2 kWh (HYBRID4)

These models will feed into PSA’s strategy aiming to have electric or hybrid models across their entire line-up by 2025 (we reported).  The first step will be the electric version of the Peugeot 208 and DS3 Crossback, as well as a PHEV version of their DS7 Crossback in early 2019 before the new PHEV variants are to follow later that year.