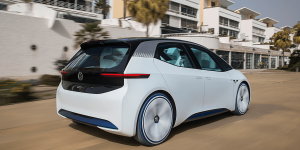 The VW company is reportedly increasingly focusing on preparing their facilities in Germany for the planned electrification offensive. Now the Germans have announced that they are planning an electric model which will retail for under €20,000, in addition to their I.D., which will cost under €25,000 at the basic price. VW Commercial Vehicles is also looking to manufacture the I.D. Buzz in Hannover starting in 2022.

Although these plans have been reported by multiple media sources, they have not yet been confirmed by the VW company.

The new polo-sized electric car would use the MEB platform, and go into an annual production of about 200,000 vehicles. The vehicle would then not only be used under the VW brand, but would also be sold through VW subsidiary companies. Production looks like it will be taking place in Emden, which has reportedly been gearing up for electric vehicle production and the manufacturing of the I.D. Aero in a Passat size. The plan would then be to reach a maximum production capacity of 300,000 vehicles per year at the Emden factory.

Furthermore, VW has been strongly considering a faster electrification of their utility vehicle factory in Hannover. The rumour is that the company plans to electrify the factory sufficiently to begin production of the I.D. Buzz in a 100,000 vehicle annual capacity in 2022. The factory will not be used exclusively for the production of electric vehicles, however.

The final decision for these plans will be made when the VW supervisory board  meets next week.

VW’s foray into the world of electrification will begin with the I.D. in 2020. The newly developed battery forerunner will also function as a blueprint for battery and e-mobility development in Germany. All major VW manufacturing facilities in Wolfsburg, Zwickau, Salzgitter and Braunschweig will be included in the electrification initiative, which now also includes Emden and Hannover.