At the end of last year, when the EU decided to reduce the CO2 emissions of new car fleets by 37.5 per cent by 2030 compared to 2021, Volkswagen CEO Herbert Diess announced that the Group would be doing more towards electromobility than previously planned. At the time, it was said that around 600,000 more electric cars would have to be sold annually by 2030. Diess himself noted that the proportion of electric cars in the consolidated balance sheet would have to rise to over 40 per cent to meet the new CO2 targets.

Now Volkswagen is officially setting a new target: the electric-share in the fleet is to rise to at least 40 per cent by 2030, according to a press release by the Wolfsburg company. And, Diess leaves no doubt that he considers electric mobility to be the only viable solution for the future: “Calculated over a distance of 200,000 kilometres, an electric car needs around 400 watt-hours per kilometre over its entire life cycle – including production. This makes it much more efficient than other alternative drives.” 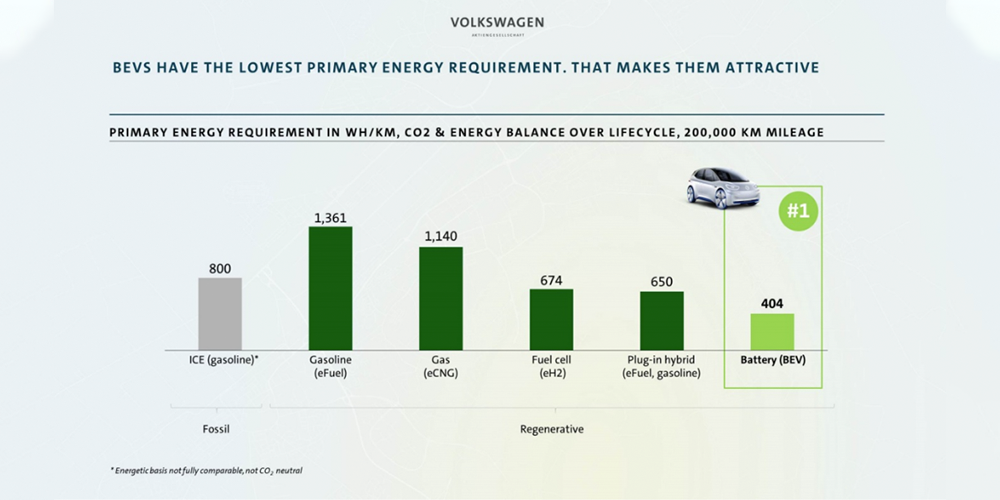 The CEO of the German car-making giant also outlined their new found clarity in their approach saying “openness to technology is now the wrong slogan and will only lead to a shift in system change further into the future”. He added that it is necessary to concentrate political and social forces on the system change to electric-mobility to create the critical mass and build the necessary infrastructure. Says Diess: “Electric-cars need a rapid energy turnaround. Coal- and CO2-free electricity is a must. We call on industry, politics and society to jointly set all levers in motion to help electric-mobility achieve a breakthrough.”

As far as the investment volume in the electrification offensive is concerned, Volkswagen continues to speak of the sum of 30 billion euros mentioned in mid-November. To secure production, the Wolfsburg-based German company has contracts for battery cell supplies with LG Chem, SKI, CATL and Samsung. According to Volkswagen Group, it is also “intensively examining its participation in its own battery cell production in Europe”. As reported, however, these plans are being torpedoed by current suppliers.

Volkswagen has embedded its electrification approach in a broad-based CO2 reduction strategy with the following targets: By 2025, the CO2 footprint of the vehicle fleet is to be reduced over its entire life cycle by 30 per cent compared with 2015 and the CO2 emissions of all plants are to be reduced by 50 per cent compared with 2010. “Volkswagen takes responsibility for the major issues of the future – especially climate protection,” comments Volkswagen Chairman Herbert Diess.

In addition to sharing their MEB platform with other companies, Volkswagen’s first of the new-generation electric vehicles go into production this year. The Audi e-tron will be followed by the Porsche Taycan, which have each already tallied up a total of 20,000 reservations. Volkswagen asserts that electric vehicles will become mainstream with the ramp-up of the Volkswagen ID. Other models in this first batch will be the ID. Crozz, the Seat el-born, the Škoda Vision E, the ID. Buzz, and the ID. Vizzion.

Other mechanisms in the car-makers electrification approach include the installation of 400 fast-charging stations along  Europe’s major roads and highways by 2020, with Ionity, among others, and Electric Life (Elli), Volkswagens new energy subsidiary offers charging-from-home solutions with wall boxes. Also in the offensive are the installation of 3,400 charging points at employee car parks at all plants as well as charging options at dealerships.

To be able to make the necessary investments for the electric offensive, Diess calls for greater effort: “We must continue to increase our efficiency and our performance in all areas”. The increased pressure to cut costs will also be reflected in staff reductions. As German news magazine Wirtschaftswoche reports, in addition to the 14,000 jobs already agreed with the works council, another 7,000 jobs are to be cut in Emden and Hanover by 2020. According to insiders, another 5,000 to 7,000 jobs could be cut in administration.