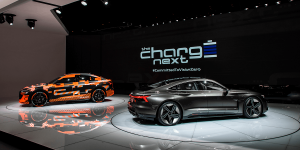 Audi has expanded its electric roadmap and now intends to offer around 30 electric and plug-in hybrid models by 2025. At the end of 2018 there was still talk of 20 electrified models by 2025.

Just a few days ago, the VW Group initially announced that it would build 22 million electric vehicles on its own electric platforms over the next ten years, some seven million more than previously planned. This will be accompanied by an increase in the number of e-models from 50 to 70.

In the successive restructuring of the model portfolio, Audi will exploit synergy potential within the VW Group to a much greater extent in the future, for example in scaling electric mobility via the PPE premium architecture developed jointly with Porsche and the Modular E-Drive Construction Kit (MEB) together with Volkswagen. Audi CEO Bram Schot: “Customers will change over to electric cars faster and more widely than we initially expected. This is also demonstrated by the extremely positive response to the Audi e-tron and to the Q4 e-tron concept, which we presented last week at the Geneva Motor Show.”

By the end of 2020, Audi plans to have launched a total of twelve electrified vehicles, covering every segment. The Audi e-tron will be followed this year by the presentation of the Audi e-tron Sportback, and in China the Audi Q2L e-tron, specially designed for the Chinese market, will roll off the assembly line. There will also be six plug-in hybrids. Audi recently introduced the A6, A7, A8 and Q5 as part-time electric vehicles. The Q7 and A3 will be added as plug-in hybrids this year.

The production version of the four-door Audi e-tron GT high-performance coupé, which is being developed at Audi Sport GmbH, is scheduled to be unveiled in the second half of 2020. And the production debut of the compact Audi Q4 e-tron is to take place simultaneously. Shortly thereafter, BEVs from Audi and Porsche will follow on the jointly developed PPE platform. At Porsche, it is already clear that it will be a purely electric version of the Macan. At Audi, the model has not yet been announced.