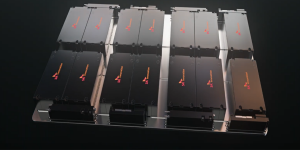 Shortly after the start of construction of SK Innovation’s second battery cell factory in Hungary, the official ground-breaking ceremony for the South Korean manufacturer’s first US plant in the state of Georgia took place.

The factory, which is being built about 65 miles northeast of Atlanta, will be built in two phases and is expected to have an annual production capacity of 20 GWh by 2025, which could later be increased to up to 50 GWh depending on the future order volume.

The construction of the first phase with an annual capacity of 10 GWh is to be completed in 2021 – with good reason: SK Innovation will supply battery cells to the Volkswagen Group, which intends to start production of an electric SUV at the Chattanooga plant from 2022. This will involve the VW ID. Crozz. Later, the ID. Buzz will roll off the assembly line there.

Due to the high demand from the automotive industry, SK Innovation plans to spend an impressive 10 billion dollars on investments in battery cells by 2025 anyway in order to increase its production capacity (all plants combined) to a total of around 100 GWh per year by then. The Koreans currently have a capacity of 4.7 GWh per year, which is expected to rise to 60 GWh by 2022 as an interim target.