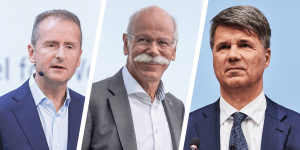 During a call, executives of VW, BMW and Daimler have agreed on a common approach towards electric mobility following Volkswagen’s recent demand for technological clarity. Insiders report the trio being in agreement that the near future belongs to battery-electric vehicles.

In the coming decade, electric mobility will be the only technology to enable carmakers to comply with environmental laws in the EU, claim the Germans. Apparently now, the bosses of the big three, VW, BMW and Daimler jointly agree that the focus will be on battery-electric cars. The trio do not think fuel cell cars will be ready for market in the next ten years.

Other manufacturers take a different view, of course, especially Asia’s big three, Toyota, Hyundai and Honda. While the former two launched working hydrogen models already – infrastructure aside – Honda as well is about to set free the Clarity Fuel Cell model this spring. Moreover, VW brand Audi is looking into fuel cell technology, and Daimler has made advances in hydrogen territory more than once.

However, for now, and in the shorter run, the direction for passenger electric cars appears clear. According to the Handelsblatt, the three companies want to promptly inform the industry’s lobby association, the VDA, of their unified position. They expect the association to draw up a consensus paper which would then represent their common position with governmental representatives. At its core, the carmakers want this to be the basis for the expansion of charging infrastructure and for a promotional backdrop, including channelling money away from diesel subventions.

Talking about the backdrop – this agreement is an escalation of a conversation VW had wanted to have before. Volkswagen CEO Herbert Diess recently threatened to resign from the VDA, among his other general demands regarding the German government’s charging and EV subsidy strategy. When extrapolating on why VW no longer feels properly represented by the association, he criticised the VDA’s approach of “openness to technology”. Here he made it very clear that he sees “no alternative to e-mobility in the next decade” and recently even stated that “openness to technology is now the wrong slogan and will only lead to further system change in the future”. He, therefore, calls on the VDA, among other things, to massively promote electric cars at the expense of combustion engines.

Diess now apparently has the backing of the other large German car manufacturers. This is the result of a 40-minute telephone conference. According to the Handelsblatt, the heads of VW, BMW and Daimler are also under time pressure to work out a unified position. Next month a mobility summit could take place at the Chancellor’s Office to discuss the framework conditions for the expansion of electric mobility.

6 Kommentare zu “‘Das Auto’ is to be battery-electric”