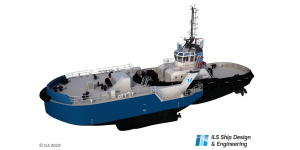 Under the Finnish Transport Infrastructure Agency, an EU funded project is developing an innovative icebreaker vessel in the far north of Finland. A removable bow will allow any ship to break through the ice with an hybrid-electric drive coming from Danfoss Editron.

The icebreaker will be anchored in the port of Mustola in Lappeenranta, Finland, and will operate in the Saimaa Lake area from winter 2020. It is being developed as part of the “Winter Navigation Motorways of the Sea II” project, which is co-financed by the EU and has a total budget of 7.6 million euros.

One of the main objectives of the project is to develop a motorised, detachable bow concept that will allow ships to double as icebreakers in winter. Turku Repair Yard will contribute a bow for the demonstration copy, and Danfoss will provide the hybrid system with two diesel generators and two electric propulsion systems, as well as control elements and software.

At winter temperatures that can drop to -30 degrees Celsius, icebreakers are a necessity in Finland even in mild winters. “Our headquarters are in Lappeenranta, so we can see first-hand how harsh winter conditions directly impact shipping transport,” says Danfoss project manager Kari Savolainen. The new removable bow will make the entire industry more efficient and sustainable, as it will allow “virtually any tug to become an ice-breaker ship”. According to Savolainen, the system can also be converted into a fully electric solution if required.

For Danfoss Editron, it is the second ice breaker. The company is also supplying the drive for Stockholm’s first ice-capable hybrid passenger ferry. As the Stockholm-based Waxholmsbolaget ferry will be in service throughout the year, it has been specially designed to operate in waters with an ice layer up to 25 cm thick (we reported).

In Finland, the addition of the icebreaker technology will help the country reach its target to lower emissions by 40% by 2030 compared to 1990 levels.