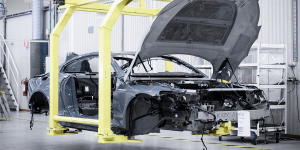 Polestar has established a new R&D centre for future electric vehicles in Coventry, England. At the new British location, the Volvo electric brand will initially employ around 60 engineers to support the development of vehicles beyond the Polestar 3.

The team was already involved in the pre-development work for Polestar and will now be fully involved in future car projects, according to an accompanying press release.

“Polestar’s role as a technology spearhead requires new and developing skills in low-volume, light-weight, multi-material performance car engineering, and the new UK operation will allow us to take the next steps towards our future cars,” explained Hans Pehrson, who has been responsible for research and development at Polestar since early 2018. The team of 60 engineers will soon be expanded to complement the existing R&D teams, including those based in Sweden.

In 2017 Polestar gave the go-ahead for its planned electric offensive. The first model is the Polestar 1, a four-seater Grand Tourer Coupé with hybrid drive and 150 km electric range. At the end of February 2019, the Swedes also officially presented their first volume model: The all-electric Polestar 2 is powered by two electric motors with a combined output of 300 kW and has a battery capacity of 78 kWh, which should enable a WLTP range of 500 km. It will be built in China. Polestar names the USA, Canada, Belgium, Germany, the Netherlands, Norway, Sweden and Great Britain as the first target markets in addition to the Middle Kingdom. Finally, Polestar is also planning a coupé SUV called Polestar 3 for 2022.