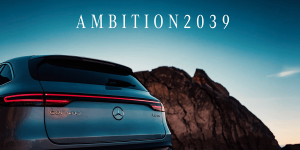 The future Chairman of Daimler’s Board of Management, Ola Källenius, presented his sustainability targets for the passenger car sector under the heading “Ambition 2039”. During the next 20 years, the new range of Mercedes-Benz Cars is to become completely CO2-neutral.

Further targets laid out in Daimler’s Ambition 2039 include: By 2030, the manufacturer intends to generate more than 50% of its passenger car sales with electric cars and plug-in hybrids, and by 2022 all European Daimler factories will be producing in a climate-neutral manner. In contrast to other companies, Daimler also wants to take the preliminary products into account in the latter goal. This means that the carmaker will encourage its suppliers to take part in the ecological turnaround since Daimler outsourced most of its supply chain.

Källenius, who will take over from Dieter Zetsche as Chairman of the Board of Management next week, also addressed various topics that are currently much discussed during the presentation of the sustainability goals. Keywords: technology openness and CO2 pricing.

First and foremost, the Swedish manager is different from Volkswagen CEO Herbert Diess in his advocacy of technology neutrality: “Our current focus is on battery-electric mobility. But there’s also room and need to continue to work on other solutions, for example, the fuel cell or eFuels.” He adds: “Today, no one knows for sure which drivetrain mix will best serve our customers’ needs 20 years from now. That’s why we encourage policymakers to pave the way for tech neutrality: Let’s fix the target, but not the means to achieve it.”

That doesn’t sound like the common line that the bosses of VW, BMW and Daimler had previously agreed on following VW and Diess’ initiative: The future belongs to battery electric mobility, was the statement said to have been unanimously supported in March reportedly. Diess had threatened to withdraw from the VDA at the time, because the VDA admitted its “openness to technology” although he included diesel as well. Still, he made it quite clear that there will be “no alternative to e-mobility in the next decade” for his group and that “openness to technology is now the wrong slogan and will only lead to further system change in the future”.

But back to Daimler’s Källenius: On the subject of climate-neutral mobility, he said, among other things that Daimler is “open to a discussion on effective CO2 pricing as well as incentives for low/ no carbon technology – preferably on a global scale”. The change towards sustainable mobility in the future will only succeed if the car industry, energy suppliers and politicians work hand in hand. “There is a need for massive investments and concrete measures beyond the automotive industry. Climate-neutral energy and comprehensive infrastructure are essential for this system change,” said the executive.

This does not make him the first automotive group manager to comment on a potential CO2 tax. A few days ago, Opel CEO Michael Lohscheller told the TV channel Arte, that he could imagine such an instrument under certain conditions: “We already think that CO2 pricing as an instrument that can make a contribution to climate protection should be discussed open-ended,” he said.

Meanwhile, Daimler’s management wants to link their salaries in part to the achievement of sustainability goals: “To underline that we mean it, part of the compensation of our board of management is linked to the achievement of our sustainability goals – including our CO2 footprint. We’ll all have to get out of our comfort zones to find new ways to move forward,” Källenius said.