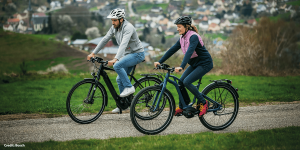 Bosch eBike Systems has presented its new products for 2020. In addition to better batteries and quieter motors, there are several new digital functions – as well as new drive units for electric cargo bikes.

This is the first time Bosch has designed a product line especially for cargo bikes. According to the German company, the new Cargo Line (25 km/h) is specially designed for e-cargo bikes with a permissible total weight of up to 250 kilograms. With a maximum torque of 75 Newton metres and up to 400 per cent support, the drive is designed to simplify driving when fully laden. This is made easier because the Drive Unit always adapts the support to the specific payload. Since the motor already develops its full power at low cadence frequencies, the load-dependent support can assist accordingly. This should ensure a smooth and controllable response and still be “clearly noticeable” in extreme situations such as starting off on a steep hill when fully laden.The drive is available in two versions: with support up to 25 km/h or as Cargo Line Speed for S-Pedelecs up to 45 km/h.

Claus Fleischer, CEO of Bosch eBike Systems said that, “Electric cargo bikes are becoming increasingly popular in inner-city traffic.” He explained that, “With a specially designed drive system, we want to further promote this positive development and contribute to relieving road traffic and protecting the environment.” In Germany alone, just under 40,000 electric cargo bikes were sold in 2018, representing growth of around 80 per cent over the previous year.

Cargo bikes can also be fitted with a further innovation from the 2020 product year: The PowerTube 625 is a battery that can be integrated into the frame with an energy content of 625 watt hours. According to Bosch, the compact size (416 mm x 84 mm x 65 mm) and the weight of approx. 3.5 kilograms enable optimum integration into the frame. The PowerTube 625 is also available in combination with a DualBattery: The coupling of two batteries provides the pedelec rider with up to 1,250 watt hours of energy – suitable for long tours or heavy loads on electric cargo bikes.

With the PowerTube 400, Bosch also offers a smaller and lighter version. In city e-bikes, where the maximum range (and battery capacity) play only a minor role, the smaller battery can be seamlessly integrated into the design of the bike.

The motors in the Performance Line for recreational athletes, trekkers, touring cyclists, and commuters have also been updated. With a maximum torque of 65 Newton metres and up to 300 per cent support, the values are somewhat lower than for the Cargo Line, which is designed for heavy loads. A new transmission concept is intended to make the drive significantly quieter and reduce the pedal resistance that has existed to date even in offroad operation and at speeds of over 25 km/h. The new transmission concept is also intended to reduce the noise level of the engine and the pedal resistance.

To make it a lot more difficult to steal e-bikes, Bosch has developed a new function called Lock – as a kind of additional digital protection. If the onboard computer is removed, the engine support is also deactivated. “The fact is that digital solutions cannot replace the classic mechanical bicycle lock, but they can expand it,” says Fleischer. “With Lock, we have now developed a function that gives e-bikers more safety and makes work a little more difficult for bicycle thieves because it significantly reduces the value of the pedelec. Without support, the fun of riding is severely limited and the chance of reselling the bike is considerably more difficult.

Bosch also wants to network the driving experience: With a new app, the smartphone can also be used as a display on the e-bike. The newly developed “SmartphoneHub” is intended to offer the driver a wide range of useful functions – from navigation to music control, fitness tracking and phonecalls, right through to connection to other services and apps such as Strava and Komoot.