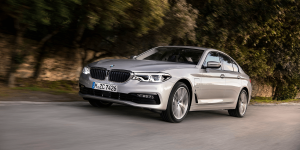 With immediate effect, BMW is installing more powerful battery cells in the plug-in hybrid version of the 5 Series. The aim is to increase the electric range to up to 57 kilometres and reduce CO2 emissions by 20 per cent.

BMW now states that the combined fuel consumption is 1.5 to 2.0 litres of petrol per 100 kilometres. The combined power consumption should be between 20.3 and 24.3 kWh per 100 kilometres – all WLTP values. With the battery update, BMW is also introducing a further drive version: With immediate effect the 530e xDrive with all-wheel drive will also be available for sale. The standard consumption here is between 1.8 and 2.4 litres.

According to the press release, both variants benefit from “the latest advances in battery cell technology for BMW Group electrified models”. BMW does not name the exact cell technology, but it is likely to be Samsung SDI cells. Last year there were reports that the Korean battery cell manufacturer will deliver 500,000 cells per month with a capacity of 34 Ah to BMW. In PHEV, these cells will replace the previous 26 Ah cells of the previous generation.

With the new cells the gross capacity has increased from 9.2 to 12 kWh, the net capacity is now given by the carmaker as 10.8 kWh. This should be sufficient for an E range between 49 and 57 WLTP kilometres (xDrive: 46-53 kilometres). This should enable most journeys through city centres to be made purely electrically. This is also better, because from 2020, the so-called “eDrive Zones” will be part of BMW’s standard equipment for plug-in hybrids.

With the standard charging cable the process takes up to six hours, while BMW specifies about 3.5 hours charge time with a type 2 cable at a public charging station or the wall box in the garage at home. The charging port is still located under a separate flap near the front wheel on the driver’s side.

Engine performance is not affected by the battery update. The 2.0-litre petrol engine continues to deliver 135 kW, while the electric engine integrated in the eight-speed automatic transmission housing achieves 83 kW. The system output adds up to 185 kW, the maximum system torque is 420 Newton metres. In hybrid mode (called “AUTO eDRIVE” by BMW), a maximum speed of 110 km/h is possible in electric mode, while in “MAX eDRIVE” both variants can travel at speeds of up to 140 km/h. The system’s maximum torque is 420 Nm.

An AVAS is standard on board, which is intended to draw the attention of other road users to the car with a special sound when driving electrically at speeds of less than 30 km/h. The AVAS is also available as an option. Stand air conditioning, which also allows pre-conditioning of the interior via an app, is also part of the standard equipment.