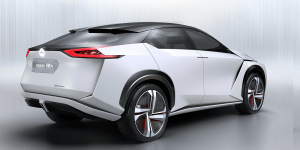 Nissan has given US dealers a first preview of a new electric crossover. A closer version of the new Nissan electric will be presented next month at the Tokyo Motor Show. The production version is expected in the USA in the second half of 2021.

The purely electrically powered crossover is one of eight electric models that Nissan is planning worldwide until 2022 and, according to reports, will be based on the new Renault-Nissan-Mitsubishi platform mentioned in mid-2018. According to dealers who have seen the vehicle, it will have a range of almost 500 kilometres and can accelerate from 0 to 100 km/h in less than five seconds. Despite, or perhaps because of these reasonably impressive specs, Nissan does not yet want to comment officially on the new model.

What is certain, however, is that the five-seater will be based on the IMx study presented at the end of 2017. Eyewitnesses state that the future electric SUV will have a shorter bonnet. At the time, the IMx was described as allowing a “look into the future” of the “Nissan Intelligent Mobility” strategy. A core element of the technical development is, for example, the new version of the ProPilot (ProPilot 2.0), which enables semi-automatic operation of the vehicle. When this driving mode is selected, the steering wheel disappears from the dashboard leaving the occupants search in vain for control elements. According to US dealers, the new e-SUV will also feature ProPilot 2.0. The cockpit has a digital dashboard that remains hidden until the vehicle is switched on, according to Automotive News. When drivers get into the car, they only see a pulsating start button. Pressing the start button brings the high-resolution display to life.

Since launching the Leaf in 2010, Nissan was afforded a big lead in the electric car market, but critics have been saying the lead was squandered, allowing other carmakers to catch up. While Nissan continues to use the Leaf to open new markets in South America and the Southeast Asia & Pacific region, with the new range, Nissan’s new Leaf should also be competitive with upcoming longer-range purely electric models.