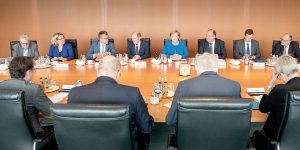 As controversial as Germany’s latest climate protection package may be, for e-mobility a golden age is dawning. After all, its promotion is at the heart of efforts to reduce emissions from the transport sector. An overview.

Since the Grand Coalition could not bring itself to make the use of vehicles with internal combustion engines less attractive with a high CO2 price or even to initiate a phase-out of this technology, the climate package’s central pillar is incentivised electromobility in transport. The Climate Cabinet agreed on the following points:

The figure of 1 million charging stations by 2030 ghosted through the gazettes more frequently in recent times. Experts consider such a lavish expansion of charging infrastructure completely excessive, and behind the scenes, communicated this to politicians several times. The climate protection programme, therefore, only talks about a total of 1 million charge points – a small difference in the name that greatly affects the expansion path. Since the vast majority of charging stations offer at least two charge points and larger multi-chargers even up to four, the target corridor becomes somewhat narrower. The corresponding funding programs are to continue until 2025. Besides, the government intends to present a “Master Plan Charging Column Infrastructure” this year, which will show how regulatory measures can also be used to create charging stations at sites where “market-driven supply in line with demand does not take place”. In other words, the gaps in rural areas should somehow disappear. For example, a “supply condition” is to regulate that “charging points are offered at all fuel stations in Germany”. Also, in the event of “regional market failure”, distribution network operators should be enabled to set up a publicly accessible charging infrastructure. Operators are also encouraged to invest in their network’s intelligence and controllability to avoid local bottlenecks.

To facilitate the installation of charging stations in customer car parks, the government envisions a call for subsidies at reduced rates because these chargers would not be available 24 hours a day. Jointly used private and commercial charging infrastructure (e.g. in apartment buildings and employee car parks) is also to be promoted, as are private stations with a craftsman bonus. The reform of the Home Ownership Act (WEG) to facilitate charging infrastructure development, for example in underground garages of multi-family dwellings, is also mentioned, with the unanimity principle to be replaced by the majority principle. Besides, landlords shall be obliged to tolerate the installation of charging infrastructure. Also, hurdles are to be lowered. Here, however, the climate package neglets to name keywords such as accelerated grid connection, legal certainty in calculating levies and controllability/charge management for grid-compatible charging.

Interesting detail: To better coordinate the ramp-up of electromobility at municipal, state and federal level, the government is to instate a “National Control Centre” for electromobility. Such a centre has been completely lacking so far.

The climate protection package continues along the already known target corridor of 7 to 10 million registered electric vehicles by 2030. As already announced prior, the company car regulation (keyword: 0.5% rule) for electric vehicles and plug-in hybrids will be extended until 2030. The company car tax for purely electric vehicles is to fall even further up to a price of 40,000 euros – from 0.5% to 0.25%. This will make the electric compact class around the Volkswagen ID.3 even more attractive. However, the exemption from motor vehicle tax will only be extended until 31 December 2025, and the 10-year tax exemption will be limited until the end of 2030.

The environmental bonus for the purchase of electric cars, plug-in hybrids and fuel cell vehicles is also to be extended beyond 2021 – and even increased for vehicles under 40,000 euros. However, the climate package does not include an actual figure. There is no talk either of an EV quota, which the social democrats (SPD) in particular wanted.

The Passenger Transport Act is to be amended in such a way that “Federal states and municipalities can set emission requirements for buses, taxis and rental cars”. It would, therefore, be conceivable that large cities such as Berlin or Hamburg would only issue an operating permit for electric vehicles of this type after a certain deadline. Furthermore, the “modernisation and climate-friendly conversion of bus fleets” is to be continued and, in particular, the promotion of buses with electric and fuel cell drives is to be stepped up. Details on this remain missing.

Truck traffic should also save CO2; by 2030 “about one-third of the mileage in heavy road freight traffic should be electric or run on electricity-based fuels”. The German federal government also wants to expand the infrastructure for electrified trucks, whether with batteries or fuel cells on board, but otherwise remains vague. In the case of the truck toll, climate-friendly drives are to continue to be given preferential treatment, with a CO2 surcharge for the combustion fraction.

Meanwhile, the German government expects fuel cells to become increasingly crucial for trucks and other heavy commercial vehicles. Therefore, the framework conditions for hydrogen electrolysis and refinery processes for the production of electricity-based climate-neutral gases and fuels are to be improved. “In the medium and long term, hydrogen-based fuel cell technology will also have to be widely applied in the mobility sector”. A national hydrogen strategy should, therefore, be in place by the end of the year.

The share of inland waterway transport in freight traffic is to increase, and the engines are to be as clean as possible. For this reason, the federal government wants to reduce the levy on shore-side electricity and “temporarily” promote fuels with lower emissions and air pollution. Unlike on the road (with its powerful lobby groups in the background), the Grand Coalition is also daring to use the term “regulatory law” here. It says: “In the case of seaports, an initiative is being launched to introduce a land electricity obligation throughout the EU; in the case of inland ports, national regulation is being examined”. Imagine such statements concerning road traffic…

The “Altmaier billion” for battery cell production has also found its way into the climate protection programme. “To map the entire value chain of electromobility in Germany and Europe, the establishment of sustainable battery cell factories is being supported,” it says. Furthermore, suppliers are to be supported “with suitable instruments in the forthcoming transformation of their industry”. What exactly this means remains nebulous for the time being.

Sector linking is to be promoted and existing hurdles lowered. “For this reason, storage facilities will be exempted from existing levies and will be given end-consumer status,” says the climate protection package. Whether this also applies to mobile storage facilities, i.e. electric car batteries, is unclear.

In addition to an electric car quota, the federal government has not mentioned a reduction in diesel subsidies with a single syllable either. The climate protection package, therefore, only provides carrots (for electric mobility) and refuses the stick. Voluntary action takes precedence over coercion. All will presumably appreciate this gift to the voters, but hardly help climate protection in transport. It hardly initiates a true transport turnaround due to the continued low CO2 prices. After all, a significant part of the transport will be electrified. However, there is every indication that the Federal Government has missed the big step in the transport sector with this climate protection programme out of consideration for the automotive industry and motorists – and that the automobile will continue to be the dominant means of transport.