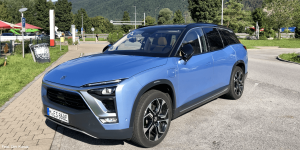 The Chinese electric car startup Nio is apparently fighting for survival. In its newly published business figures, the company reports a loss of 478.6 million dollars for the 2nd quarter of 2019 alone – significantly more than analysts were expecting.

According to Bloomberg, Nio’s losses since its launch in 2014 now add up to nearly $6 billion – more than Tesla accumulated in 15 years. The startup will reduce its workforce by 14 per cent to 7,500 employees by the end of the month after already having to scrap plans for their own plant in Shanghai earlier this year.

Nio is also affected by the declining subsidies in China. In the 2nd quarter, the manufacturer sold only 3,140 units of its ES8 and 413 units of its ES6. After initial successes with the ES8, which is now ready for the first press test drives in Europe, Nio has been plagued by negative press: plans for the own factory near Shanghai were stopped (and later replaced by the Beijing plans) followed by threatened lawsuits, and a recall of almost all ES8s delivered was expensive and put pressure on the company’s image. Due to the recall, battery capacities were exhausted, which in turn harmed further deliveries. Also, in the meantime, co-founder Jack Cheng also retired – and this year alone almost a quarter of the workforce is expected to leave. In their favour, Nio has also recently forged new partnerships with Pro Logium to develop solid-state batteries, and have presented lighter battery casings with German manufacturer SGL Carbon.

In contrast to projects such as Qoros or Faraday Future, Nio was considered solidly managed and well-financed – and was compared to Tesla not only because of its approach of slowly advancing into the volume segment via premium electric cars. The IPO in New York earned the company a billion dollars. Industry experts attribute the situation at Nio to the general market situation for electric cars in China, but also to homemade problems. The fact is: After the government cut subsidies for New Energy Vehicles at the end of June, sales of electric cars fell slightly. In addition, established car manufacturers and joint ventures with foreign carmakers are bringing more and more electric models onto an increasingly competitive market.

Nio is attempting to counteract this with a rigid austerity program and significant job cuts. Whether new models see the light of day, however, will probably depend on how quickly the management manages to turn the tide.