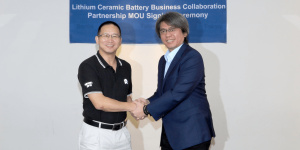 China’s EV start-up Nio is cooperating with battery cell manufacturer ProLogium of Taiwan to develop solid-state batteries. The short-term goal is a prototype. Whether the longer-term goals can be achieved will probably also depend on the economic situation at Nio.

ProLogium has been researching solid-state batteries for some time now and is focusing on lithium ceramic technology (LCB). According to ProLogium, the company holds a total of 129 patents in China, the USA, Korea, Japan, Great Britain and the European Union. In addition to the prototype above, the two new partners also want to cooperate in the production of battery packs with solid cells.

It is unclear what the strategic cooperation with Nio means for the deal with Enovate, which ProLogium only entered into in April. Originally, the Taiwanese company’s solid-state cells were to be used first in Enovate’s electric cars.

It is also unclear whether the economic situation at Nio at all allows the long-term goals of the ProLogium cooperation. The departure of founder Jack Cheng a week and a half ago is is only the most recent of a long list of negative headlines. Plans for the company’s own factory near Shanghai were stopped, a recall of almost all ES8s delivered to date was expensive and put pressure on the company’s image. Due to the recall, the battery capacities were exhausted, which was to the detriment of the deliveries. Additionally, further details about the job cuts at the company were also announced.

Akasol marks minor profits for first half of 2019

CATL doubles profits for first half of the year