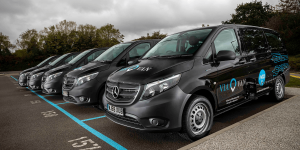 The ride-sharing provider ViaVan launches its first electric fleet in Great Britain. In the city of Milton Keynes, ViaVan is initially bringing five Mercedes Vito eTourers onto the roads and intends to expand its electric fleet there to 30 EVs by next year.

In July, ViaVan had announced that it would convert all its locations to fully electric fleets by 2025. According to ViaVan, the fleet in Milton Keynes is the next step in its vision to advance public transport across the UK through “intelligent, sustainable and low congestion joint journeys”. However, the project was also funded with more than £540,000.

Milton Keynes has set itself the goal of becoming the greenest city in the world. As part of the cooperation with ViaVan, measures will also be developed to make ridesharing services more efficient. For example, both partners want to collect and evaluate data together in order to adapt the infrastructure, for example, so that the Mobility as a Service (MaaS) offers can function.

“We are determined to improve air quality in our towns and cities to reduce the health impact of dirty emissions,” says Secretary of State George Freeman. “ViaVan’s launch today shows industry is taking full advantage of the support on offer from Government for those looking to switch their fleets to electric.”

ViaVan is a joint venture between Mercedes-Benz Vans and the US Via service. In Milton Keynes, the company has made more than 100,000 trips with its previous fleet of combustion engines, according to its own figures. In London, it has made more than seven million trips. In Germany, ViaVan is active in Berlin – albeit together with BVG under the BerlKönig brand. The Berlin fleet is to be purely electric by the end of 2020.