ViaVan initially started last year in Amsterdam and is now active in London, Milton Keynes and Berlin – where it operates together with BVG as BerlKönig. The electric share of Mercedes vans in the BerlKönig already amounts to over 50 per cent and is to be increased to 100 per cent by the end of 2020. According to Daimler, BerlKönig’s B-Class Electric Drive also included electric cars in its fleet from the very beginning. So far, the diesel versions of the V-Class and the Vito have formed the backbone. In the meantime, however, they are back in the minority.

After the eVito panel van, the eVito Tourer now complements the electric portfolio of the service. With its 41 kWh battery, the Tourer can travel between 156 and 186 kilometres – depending on wheelbase and weight. It features space up to 8 passengers, plus the driver. “The integration of the world’s first eVito Tourers into our fleet is a further step towards our goal of making urban mobility more sustainable in cooperation with cities and public transport companies,” says Valerie von der Tann, General Manager at ViaVan Berlin, according to a press release. 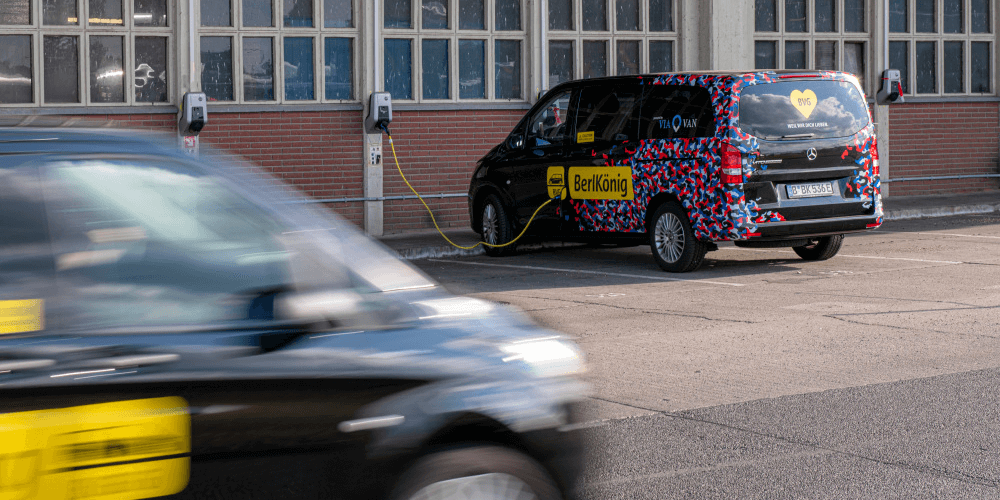 Mercedes’ eSprinter will also be launched this year, followed by the EQV electric large-capacity sedan presented as a concept at the Geneva Motor Show. The series version of the EQV will be presented before the IAA in September. A launch in the BerlKönig fleet is therefore still possible this year or at the latest at the beginning of 2020.

However, ViaVan and Daimler are not discussing a further growth strategy in the communication. Whether the ride sharing service will also be offered in other cities in the future remains unclear.