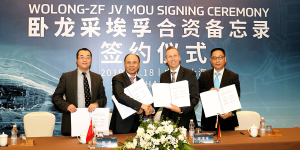 The German supplier ZF Friedrichshafen and the Chinese company Wolong Electric have agreed to set up a joint venture. The two partners intend to jointly produce electric motors for ZF electric drives.

The joint venture will operate under the name Wolong ZF Automotive E-Motors Co Ltd. and is based in Shangyu in the Chinese province of Zhejiang. By 2025, the new company is expected to grow to up to 2,000 employees. ZF is to hold 26 per cent of shares of the new joint venture.

The joint venture will produce electric motors and components for use in ZF driveline systems as well as for the open market. In its press release, ZF states that the new company has already received a major order for electric motor components for hybrid and electric drives, but has not given further details about this customer.

Jörg Grotendorst, Head of ZF’s E-Mobility Division, sees the joint venture as “a great next step in further strengthening our electric mobility strategy. With the joint venture, we extend our value chain for electric motors to include sub-components and it gives us even better access to customers and suppliers in China,” says Grotendorst.

The Chinese partner also has high goals for the joint venture. “We want to make this joint venture a global market leader for vehicle engines with sustainable energy sources,” says Jiancheng Chen, Chairman of Wolong Electric in the German press release. “We are certain that new energy vehicles will take a very large share in the future market, and this will bring unprecedented development opportunities for both of us,” he says for the English press release.

In April, ZF announced its intention to expand its activities in China. At that time, ZF was said to also produce purely electric drives in China “in the foreseeable future”. However, the joint venture with Wolong will not remain the only ZF production of electric drives in China: Another production site for electric drives is currently being built in Hangzhou, south of Shanghai, and is scheduled to start operations next year. In Shanghai, ZF is already manufacturing the 8HP 8-speed automatic transmission including a variant for plug-in hybrid drives.