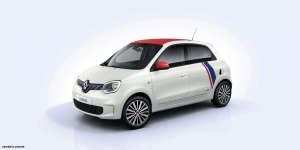 Renault is planning to launch the all-electric Twingo Z.E. before the end of this year, two years earlier than was speculated. The French manufacturer also announced the new hybrid models and its sales figures for 2019.

As Renault also announced, in addition to the Twingo Z.E, E-TECH hybrid models are to be launched this year as part of the electrification offensive. At the Brussels Motor Show, the Clio E-TECH was presented alongside the well-known Captur E-TECH plug-in, which can already be ordered in Germany.

Since September last year, a model plan has been circulating online, in which the Twingo IV Z.E. was announced for 2022. The current model, which has been sold since 2014, is the Twingo III. Since Renault has not revealed further details about the E-Twingo in the current press release apart from the market launch, it is currently not clear whether the announced model is already the fourth generation of the small car or an electrified version of the third generation. In the model plan, an “SUV compact électrique” was named for summer 2021 about which further information was also not given.

As for Renault’s sales figures, in total, the sales volume of the Renault Group fell last year by 3.4 per cent to 3.8 million vehicles. In contrast, worldwide sales of electric vehicles rose by 23.5 per cent to 62,447 vehicles. Keeping in mind of course, that Renault was one of the earliest movers on the electric car market, at a time when other traditional car manufacturers offered little competition.

Renault currently offers six BEVs: The Zoe, Kangoo Z.E., Master Z.E., Twizy as well as the City K-ZE, initially intended for the Chinese market, and the Renault Samsung SM3 Z.E., the South Korean counterpart to the Fluence Z.E., which was discontinued in this country.

Olivier Murguet, Sales and Regions Executive Vice President, of Groupe Renault, commented: “In 2020, we will benefit from full-year sales of our best-selling New Clio and New Captur, as well as the acceleration of our electric and hybrid offensive, notably with New ZOE, Twingo Z.E. and E-Tech technology. We will continue to improve our price positioning initiated in 2019, supported by the quality and attractiveness of our new products.”

Renault does not give any firm figures for the Zoe, the French firm’s most popular model now firmly entrenched in a number of car-sharing and mobility service provider’s fleets. In the light commercial vehicle segment, the Kangoo Z.E. is the “undisputed market leader” with a growth of 192 per cent to 10,349 vehicles. The China model City K-ZE, which will probably come onto the market in Europe as the Dacia, has been on sale since November and achieved 2,658 sales in the two months.