Tesla is continuously improving the chemistry of its supposedly “old “18650 battery cells, as Elon Musk explained during the latest earnings call. Tesla also says it expects the Model Y to go way further with a single charge than initially announced.

When asked directly in the conference call when they would switch the Model S and X to the 2170 cells, Musk replied: “In fact, the nuclear chemistry in the 18650 cells has improved many times over the years. So it’s really just a form factor as opposed to core technology. I think we’re pretty happy with the energy content of the cell and the increased efficiency of the vehicle.”

The actual range of the Model S and Model X is now higher than the official figures, as the EPA values have not yet been updated. Currently, the Model S with the most extended range has an EPA value of 373 miles. As Musk indicates, the range is now closer to 380 miles.

Tesla has already planned the next step: The Model S will have a range of 400 miles (644 km) shortly. This will probably be the ‘Plaid’ model announced for the end of the year with a new drive train (consisting of three electric motors), which is to become even more efficient. However, Musk did not confirm media reports that a battery update of up to 200 kWh capacity is pending for the Model S and X.

But there is already a change in range for the new Model Y: “Due to the continuous technical progress of the four-wheel drive in the Model Y, we were able to increase the maximum EPA range from 280 miles to 315 miles compared to our previous estimate,” Tesla announced in the quarterly results. That would be an increase from 450 to 507 kilometres. 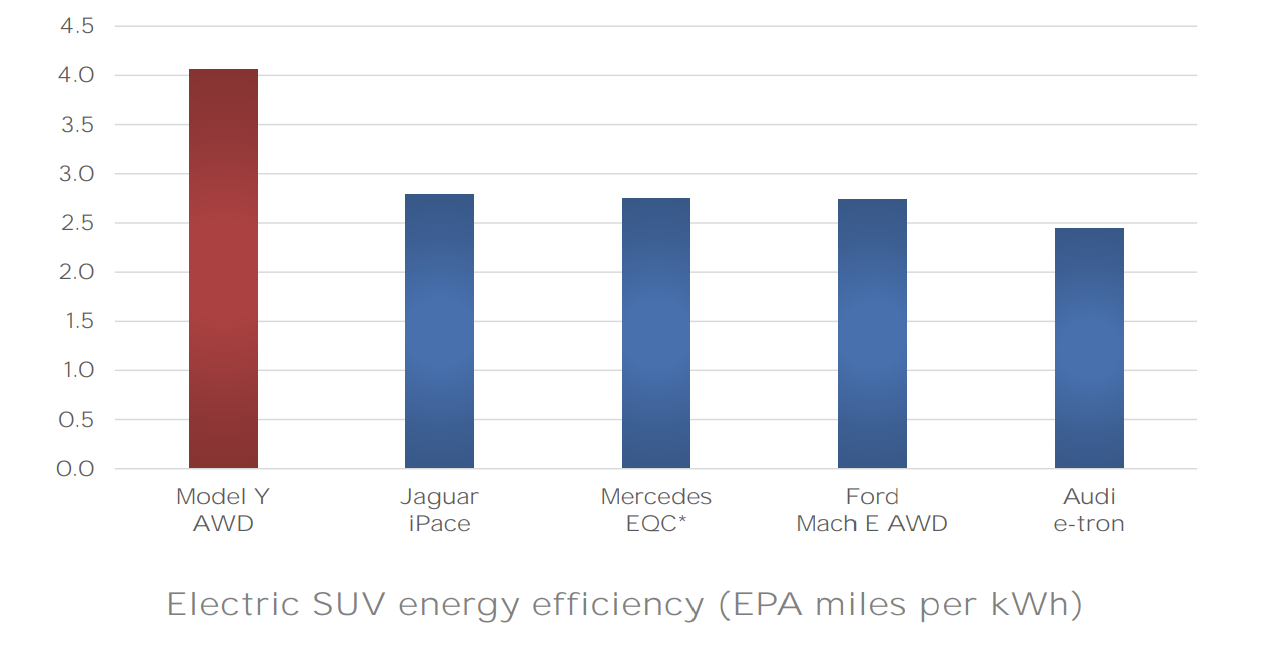 Tesla uses a graph to showcase that the range efficiency is mainly due to the efficiency of the drive: According to this, the Model Y should be able to travel 4.1 miles (approx. 6.6 kilometres) with one kilowatt-hour of electricity. For already available E-SUVs such as the Jaguar I-Pace, Mercedes EQC (not yet available in the USA), the Audi e-tron and also the new Ford Mustang Mach-E, Tesla only mentions values between 2.4 and 2.8 miles per kilowatt-hour.