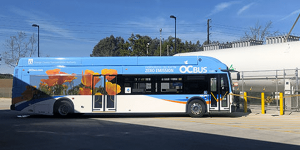 Orange County has unveiled a new bus fleet of 10 fuel cell-electric buses in Santa Ana. Besides the buses’ arrivals, the county also now boasts the largest hydrogen fueling station in the nation for public transportation.

The fuel cell buses that now arrived in Orange County are of New Flyer’s type Xcelsior CHARGE H2. The electric vehicles use compressed hydrogen as an energy source, and New Flyer says they can reach an excess of 300 miles on one fill.

The order had initially been announced last April and ended up totalling an investment of $22.6 million for emissions-free transit. The measure was supported by the California Air Resource Board (CARB) as a part of their plan to transition the entire local public transit agencies to emissions-free vehicles by 2040. The $12.47 million given by CARB in support is the largest single grant from CARB to a transit agency so far in the California Climate Investments (CCI) plan. Both New Flyer and OCTA are taking part in the ‘Fuel Cell Electric Bus Commercialization Consortium’ project (FCEBCC) funded by CARB.

The CCI covers several aspects of environmental protection but also was devised to serve low-income communities. As a whole, “CCI projects include affordable housing, renewable energy, public transportation, zero-emission vehicles, environmental restoration, more sustainable agriculture, recycling and much more”. As a stipulation, at least 35 per cent of the investments are made in disadvantaged and low-income communities, as electrification of transport is not nearly as effective if a significant section of the populace is locked out due to financial concerns.

So far New Flyer boasts with more than 10,000 buses delivered in the state of California, including multiple fuel cell buses, and has plans to deliver another 200 this year. OCTA is active across 24 cities within Orange County, serving about 40 million passengers per year.

GreenMobility to expand car-sharing to Vienna