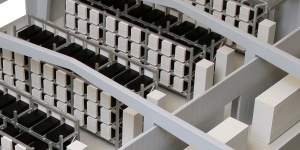 Mercedes-Benz Energy will supply storage systems based on electric car batteries for this purpose, while Alpiq contributes the energy management system and is responsible for planning, installation and sales. Alpiq also configures the software and adapts the individual services to the customer’s needs and intended use.

As a combined storage system, such batteries would make a significant contribution to energy efficiency and the reduction of load peaks for industrial companies, as well as to grid stabilisation and the integration of renewable energies, the company says.

Alpiq already uses large stationary battery storage systems and controls them by means of artificial intelligence to ensure “optimum operation and economical use”, the company states. Since April 2019, Alpiq has been operating a 1.2-megawatt battery storage facility for the Maienfeld power station, among other things. The facility reduces costly load peaks in the utility’s supply area and provides secondary control power for the system services market.

It is not an unknown area of business for Mercedes-Benz Energy: The Daimler subsidiary last commissioned another large-scale storage unit made of electric car batteries in June 2018. At the plant in Elverlingsen (South Westphalia), a total of 1,920 battery modules were bundled into a “living spare parts warehouse. With an installed capacity of 8.96 MW and an energy capacity of 9.8 MWh, the battery storage facility is available to the energy market for the provision of primary control power, for example. With the 12.8 MWh second-life battery storage facility in Elverlingsen, which was opened in 2016, and the 17.4 MWh spare parts storage facility in Hanover, 40 MWh have already been connected to the grid as buffer storage. This is in addition to the 13 MWh storage from no less than 1,000 second-generation smart batteries. The technology partner for these projects is The Mobility House.

With reporting by Daniel Bönninghausen, Germany