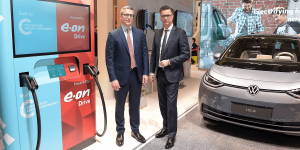 Volkswagen first made the principle of its mobile rapid charging stations with battery storage publicly available at the beginning of 2019: According to this, by coupling the charging station with a battery, it will be possible “to install ultra-fast charging points almost anywhere and at significantly more attractive conditions without civil engineering or grid connection”. What is now new is that the Volkswagen Components Division is aiming for series production before the end of this year. The manufacturer is also relying on a player from the energy market for marketing: E.ON will test the new charging points “intensively at six motorway filling stations in the second half of the year and then launch them under the name E.ON Drive Booster – initially on the German market,” according to a press release issued by Volkswagen.

According to the duo, the new technology paves the way for “setting up a larger number of ultra-fast charging points where they are actually needed”. It is expecting particular interest from public utilities and local authorities as well as from filling stations and service areas. In addition, the product range is tailored to the electrification of retail parking lots and to logistics companies such as parcel services. E.ON and Volkswagen developed the business model together. However, they are not without competition: energy group Uniper, for example, announced a few days ago that it intends to provide more than 1,300 mobile rapid charging stations in Germany by the end of 2024 as an “Infrastructure-as-a-Service” offer.

Volkswagen and E.ON, as heavyweights in their respective sectors, are of course thinking in other dimensions, even if they have not yet given absolute figures. In their current communication, they talk about charging points that have been further developed and can be easily set up and configured online. Two electric cars could charge up to 150 kW per station in parallel. This is guaranteed by the battery installed in the charging station, which is permanently fed by a conventional 16 to 63 ampere power connection. While on the subject; E.ON claims that it intends to operate the rapid chargers exclusively with green electricity. Updates, remote maintenance and billing of the charging points are to be carried out via E.ON’s central software platform.

Meanwhile, a test run is currently underway in Volkswagen’s hometown of Wolfsburg with the rapid charging points developed by the Group itself: In recent weeks, nine of them have been distributed throughout the city of Wolfsburg and can be used by electric car drivers free of charge for 80 weeks. Three further fast chargers are to be used flexibly, for example at major events. However, in contrast to the above-mentioned new prototype, these columns will be cut off at 100 kW.