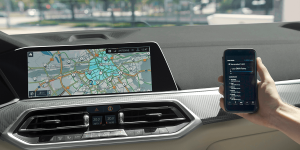 BMW has activated the eDrive Zones digital service for the first PHEV models. This is intended to allow cars to automatically switch to electric mode when entering a certain zone, such as inner cities.

BMW first announced the function last June – in the run-up to numerous premieres of new PHEV variants such as the 2 Series, 3 Series, 5 Series and X5. At that time, it was announced that the ‘BMW eDrive Zones’ would be part of the standard equipment of the plug-in hybrids from the Munich-based company from 2020. Now BMW has activated the function in all variants of the PHEV models BMW 745e, BMW X5 xDrive45e and BMW 330e.

The service itself is quite simple: BMW eDrive Zones trigger an automatic change to purely electric operating mode as soon as the vehicle enters selected urban areas such as low emission zones. “All current 58 cities and regions in Germany that have already defined a low emission zone were taken into account,” BMW writes in a press release. In addition, other core areas of cities in Austria, Switzerland, the Netherlands, Belgium and France were also included. The list of cities can be found in the manufacturer’s original communication, which is linked at the end of the text.

In the communication, BMW also indicates that the technological approach could also “be conceivable for plug-in hybrid models from other brands”. In addition, “there is the option of defining an eDrive Zone for each metropolitan area.”

The motivation is clear: the plug-in hybrids, repeatedly criticised as a climate cheat, are better off by driving only electrically in the city centres. In this way, the vehicles should also help to improve the air quality in the areas – and thus ultimately avoid driving bans or exempt PHEVs from them.

According to BMW logic, drivers should benefit from lower energy costs. To make charging PHEV batteries as frequently as possible even more attractive, the Munich-based company has announced a loyalty program called ‘BMW Points’ for the “rest of the year”. Under this program, every kilometre driven electrically counts, with points being collected doubly within an eDrive Zone. Participants are to exchange the points for rewards, such as free charging contingents from BMW Charging, according to the manufacturer.

But the service also has clear limits: the charge level or the capacity of the battery. If the battery is already empty before entering an “eDrive Zone” (or shortly thereafter), the effect is non-existent or very slight. Drivers who live within an “eDrive Zone” and are not always able to charge in inner-city areas will also have to resort to the internal combustion engine again and again. If a purely electric drive through the eDrive Zone is not possible, the combustion engine simply starts up as usual. BMW simply writes: “The plug-in hybrid vehicle is locally emission-free for as long as the charge level of the high-voltage battery allows within the eDrive zone. If the energy reserves run out, the activation of the combustion engine is also shown in the Control Display.”

In the press release, BMW also gives an interim assessment of the deployment so far – and is very satisfied. In Europe, the eDrive Zones are expected to switch a PHEV into electric mode around 30,000 times a day. More than 75 per cent of all journeys made with eDrive Zones were purely electric. In the past quarter, “an additional 3.3 million kilometres in electric driving mode” were achieved by BMW plug-in hybrids.

According to BMW, of the 75 per cent of electric journeys through the geofencing zones, 40 per cent already enter the zone in electric mode; for the remaining 35 per cent, the software switches to purely electric mode when the vehicle enters the eDrive Zone.