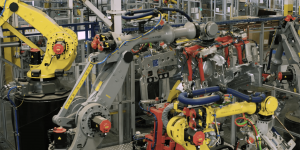 The inofficial Tesla outlet Electrek reported as much, citing several building permits applied for by Tesla. These are to be general improvements at the plant, such as an expansion of the body-in-white production, which Tesla refers to in the application as the Tesla 5k expansion – possibly an allusion to the planned making of 500,000 electric cars this year. Work is also to be carried out on the paint shop.

Tesla also wants to increase the production of the Model Y, which only started in January 2020. Thus, the forced break in production is to be used to set up a new conveyor belt for the Model Y, called Phase 3.

Tesla took over the Fremont plant from Toyota a good ten years ago. Since the production of the Model S started in 2012, there have been no significant breaks for rebuilding work. All expansions for the Model X, Model 3 and later the Model Y have been carried out during ongoing operations.

It is not known how many cars Tesla will be able to build after the conversion work in Fremont. When the production and delivery figures for the first quarter were announced, Tesla had not achieved its required Q1 target to make the annual goal of 500,000. To still reach this target, Tesla would have to set a new record every quarter after the restart of US production. In the first quarter already affected by the shutdown, Tesla built 102,672 vehicles.

While production in the USA is suspended, Tesla is ramping production at Gigafactory 3 in Shanghai further. In Grünheide, too, work for Giga Berlin continues: New videos of the site of the future Gigafactory in Brandenburg show that the cleared forest area has now been almost completely levelled. Tesla is now waiting for approval of its application for the construction of the foundation submitted to the Brandenburg Ministry of Environment.