Tesla produced 102,672 electric vehicles from January to March. Because of the forced production breaks at Gigafactory 3 near Shanghai and, from 23 March, also in Fremont, analysts had expected around 79,000 deliveries. Instead, Tesla delivered a total of 88,400 electric cars of which 76,200 were Model 3 and most recently the Model Y. The remaining 12,200 were for Model S and Model X.

It is still open how long production in Fremont will have to be suspended and what effect this will have on the year as a whole. Tesla had not yet achieved its goal of selling “at least” 500,000 electric cars in 2020 when it announced the delivery and production figures. Regarding the past perspective, Q4/2019 had been looking exceptionally good for Tesla in terms of shipments when it stated to have delivered a record 112,000 electric cars of which 92,550 were Model 3 and 19,450 were Model S and Model X as reported. Tesla then projected global vehicle deliveries should “comfortably exceed 500,000 units” in 2020 only this target may now be in jeopardy. To reach it, Tesla would have to exceed its delivery record in each remaining quarter of this year. 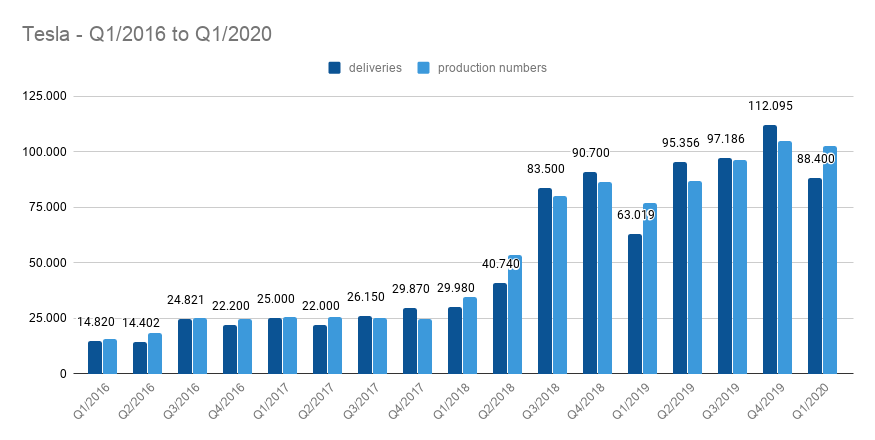 The still-good results of this quarter point to a steep ramp-up at the Gigafactory 3 in Shanghai and Tesla in the press release indeed speaks of having achieved “record levels of production, despite significant setbacks”. Those setbacks were, of course due to the outbreak of the coronavirus in China that has now reached the rest of the world. The Tesla Gigafactories in Fremont and also Nevada, where Tesla produces battery cells with Panasonic remain closed due to the Covid-19 pandemic.

Once the factories reopen, there are hopes for the Model Y, as Tesla is already preparing to deliver cheaper versions with rear-wheel drive. The current version only features an all-wheel drive. Media reports quote several buyers of the rear-wheel-drive version have been contacted by Tesla and told to “prepare for delivery”.

And there is also news of the new Giga Berlin: Tesla has applied to the Brandenburg Ministry of the Environment for early approval to build the foundation for his planned Gigafactory in Grünheide near Berlin. The ministry confirmed receipt of the application, which is currently being reviewed.