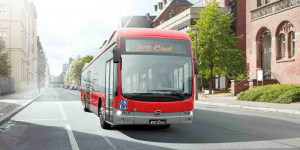 The bus operator Nobina has ordered another 13 electric buses from BYD. The new 12-metre models are destined for use in the north-eastern Swedish city of Piteå near the Arctic Circle and are scheduled for delivery in the summer of 2021.

The vehicles are the K9, the company’s best-selling electric-bus model in Europe. The recently updated buses are manufactured at BYD’s plant in Komárom, Hungary. This particular order from Nobina has been specified with optional luggage racks. The 12-metre buses have a given range of up to 250 km or 156 miles and a battery capacity of 324 kWh. BYD give the buses’ charging times as being 2-3 hours, but also note that these change according to battery age and outside ambient temperature.

According to the Chinese electric bus-making giant, the deployment in the region in the extreme north of Sweden offers the ideal opportunity to demonstrate the performance of battery-electric engineering in icy environments. These buses now ordered by Nobina will be operating close to the Arctic Circle at latitude 65.31º north.

With the new vehicles, Nobina will have 125 BYD electric buses in operation in Sweden alone. In May 2019 Nobina ordered 20 18-metre-long BYD K11 articulated buses, ten K11s as well as eleven K9s and five 8.7-meter midibuses in September 2018. So far, the e-buses have been used in Lidköping, Borås, Ale, and the Barkarby district of Stockholm.

“After more than five years and over 7 million kilometres driven with BYD e-buses, in nordic conditions. We feel confident about the BYD platform meeting our high demands of a reliable, sustainable and attractive public transport – offering a cleaner, quieter and more comfortable traffic,” said Jens Råsten, Fleet manager, Nobina Group.

Update 17 May 2021: BYD has started deliveries of the 13 electric buses that the bus operator Nobina ordered last year. The electric 12-metre buses, the first of which has now been handed over to Nobina, are scheduled to go into operation in the north-eastern Swedish city of Piteå near the Arctic Circle from the summer of this year. Nobina has already ordered a total of more than 300 electric buses from BYD, of which more than 160 vehicles are currently in operation throughout the Nordic region.