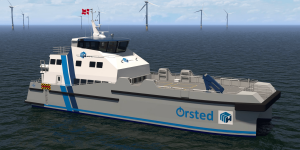 Danfoss will supply the Danish shipbuilder and operator MHO-Co with hybrid drive systems for the first two so-called Crew Transfer Vessels (CTVs) in the UK. Also, the Danish technology group announces the signing of a contract with Infineon.

Let’s first look at the sea: the hybrid-electric ships that Danfoss is helping to develop will serve Ørsted’s Hornsea Two offshore wind farm, which will be located about 90 kilometres off the coast of Yorkshire in the North Sea when it is commissioned in 2022. Crew Transfer Vessels are vessels specially designed to transport technicians and other professionals to and from the wind farms. The two planned units will be 35 metres long, have eight cabins and a large lounge and will be able to accommodate 24 passengers.

The British ships will be equipped with a serial hybrid system from Danfoss, which has four propulsion motors and, among other things, a DC/DC converter for the ships’ batteries. Further technical details are not public. Only this much: according to the manufacturer’s specifications, CTVs can be operated in both fully electric and hybrid mode. MHO-Co is hoping that the new duo will save about 140 tons of CO2 compared to conventional diesel-powered ships. The two boats are to be completed by the second quarter of 2021.

“This project will open the market for more hybrid CTVs,” says Erno Tenhunen, Naval Director of Danfoss Editron. In the past, electric motors and related components were too large for CTVs. “Our compact and lightweight technology has overcome this issue, however […]”

Danfoss also announced another deal, this time in the chip sector: the Danish group and Infineon have concluded a multi-year volume agreement given the long-term growing market demand for power semiconductors for electric cars. As a result, Infineon is supplying chipsets of IGBTs (insulated-gate bipolar transistors) and diodes to Danfoss’ Silicon Power business unit, which will use the chips primarily in power modules for inverters for drive control in electric vehicles.

The partners did not reveal the order volume or the order value. All that is known is that Infineon manufactures the components for Danfoss in its plants in Dresden and Villach, Austria. Danfoss, in turn, assembles the service modules based on this in Flensburg and Utica in the US state of New York.

According to Infineon, electric mobility will almost double the number of chips required per car compared to conventional drives – and by far the most significant part of this additional demand will be for power semiconductors. “The market for electro-mobility is picking up noticeably, and the supply industry is getting ready for this,” says Claus Petersen, Senior Vice President and General Manager at Danfoss Silicon Power. “For us as a manufacturer of power modules for electric drivetrains, long-term secure supply of semiconductors is extremely important.”

Interesting against this background: Since the end of 2019, Danfoss has been cooperating with ZF on the development and production of more robust and efficient power modules. The Danish company wants to act as a supplier of these modules, for which, among other things, the power semiconductors are to be used, which ZF, in turn, is developing in cooperation announced in November 2019 with the semiconductor specialist Cree. The partnership is to tire in a supply contract for a “significant ZF project” that is to go into series production in 2022.