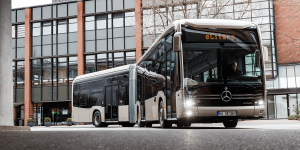 Mercedes-Benz has presented the articulated version of its electric city bus as eCitaro G and says deliveries will begin before the end of this year. The manufacturer also announces the first battery update – for both solo and articulated models.

According to Daimler, the company already has 60 confirmed orders for the eCitaro G. The first deliveries to several transport companies are planned for this year. Depending on the model, the three-axle articulated electric bus is designed to accommodate up to 146 passengers. Daimler considers this “ideal for operations in heavily-frequented towns and cities with large numbers of passengers”.

To begin with, the eCitaro G uses the familiar batteries of the 12-meter solo bus. “Expected before the end of this year”, however, is the switch to a new generation of NMC cells, increasing capacity from 292 to 396 kWh. The range is to increase”accordingly”, but Daimler does not give an exact figure in the notification to the press.

In addition to the new NMC cells, the Group also intends to offer solid-state batteries for the electric bus as an option (as announced at the premiere of the solo bus almost two years ago). The lithium polymer batteries with solid electrolyte do without raw materials such as cobalt, nickel or manganese—also energy density and service life increase. With seven of these battery packs, the eCitaro G will have a total capacity of 441 kWh. Orders for the electric bus with solid-state battery have already been received: Last year, ESWE Verkehrsgesellschaft from Wiesbaden ordered 41 eCitaro with the new battery as part of its major order. In April 2019 it was announced that the vehicles would be delivered in 2020.

Daimler justifies this twin-track strategy with the different properties of the batteries and the associated application possibilities. The solid-state batteries used by Daimler are said to be “only very limited” suitable for quick charging. Fast, intermediate charging at (end) stops is therefore not possible here. With its 441 kWh, however, Mercedes says the eCitaro G “guarantees ranges typical of city bus operations”. According to Daimler, if the route requires a standard charge at the bus stop or depot, for example in rural or hilly areas, the version with the 396 kWh NMC batteries is the best choice. However, Daimler does not address the question of whether the solo bus should also be offered with solid-state batteries.

The next step for the eCitaro – both as a solo and articulated bus – is scheduled for 2022. Then both versions will also be offered with a fuel cell as a range extender. In this way, Daimler Buses wants to make intermediate charge stops and the infrastructure required for them superfluous “in almost all cases”. Public transport operators will then have to offset what is cheaper: a few well-placed quick charging stations or a tank infrastructure for clean hydrogen.

Update 19 September 2020: According to Daimler, the development state of the eCitaro G is now “Immediately before the rollout”. The manufacturer also specifies that there will be a standard basic warranty for up to ten years or up to 280 MWh energy throughput per battery pack for the solid-state battery version. The two new battery variants presented in detail in the text above will also be used in the eCitaro Solobus. This has now been confirmed by Mercedes-Benz in the current press release. The warranty therefore also applies to the Solobus.