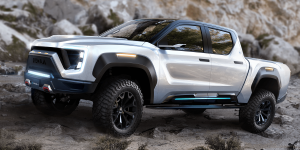 The US American manufacturer Nikola Motor, known for its fuel cell and battery trucks, has also announced its move into the segment of electrically powered pickup trucks. The first renderings of the Nikola Badger are now available along with some interesting details about the unusual drive.

The Nikola Badger that is now presented as a concept in the form of renderings is to be presented at the Nikola World 2020 event in September. Nikola has chosen a different approach to their competitors: For the drive system, the manufacturer is relying on a battery-fuel cell hybrid solution, which should help the Nikola Badger achieve a range of 600 miles (965 km). Nikola promises a range of 300 miles in purely battery-electric operation, and a further 300 miles should be possible in hydrogen operation.

The Nikola electric pick up truck should have a lithium-ion battery with a capacity of 160 kWh and Nikola claims the power of the fuel cell to be 120 kW  but has not mentioned the size and design of the hydrogen tanks. Nikola gives the peak and continuous power as 666 and 334 kW.

In addition to the drive, the company also states that it is capable of handling multiple accelerations from 0 to 100 miles per hour “with minimal loss of power”, can start up on gradients of up to 30 per cent and is capable of towing a trailer weighing around eight tons. At the same time, it should be able to outperform “all electric pickups available on the market, both in the continuous towing and high-performance range”.

The Badger aimed at satisfying the requirements of construction companies with details like the 15 kW socket for various tools, lamps or compressors. This should supply construction sites for about 12 hours without a generator. This feature is not unique since Tesla’s Cybertruck and Rivian’s R1T have announced similar features.

The Badger is to be produced through a partnership with an OEM not yet mentioned by name. The said partner’s “certified parts and manufacturing equipment” will be used, but further details will probably not be available until the presentation in autumn.

“Nikola has billions of dollars worth of technology in our semi truck program. So why not build it into a pickup truck?” asks Trevor Milton, CEO of Nikola Corporation. “I’ve been working on this pickup program for years and I believe the market is ready for it now.”

At this early stage, it is still too early to set a date for the start of sales. However, should the Nikola Badger be produced as planned, it would probably start in a highly competitive segment of the US market. Tesla will bring the Cybertruck in 2021 and Ford an electric F-150, in the same year an electric pickup truck from Hummer is also planned. Rivian plans to start production of the R1T as early as the end of 2020, and Lordstown Motors is also working on an electric pickup. In addition, Fisker is also said to have ambitions in the pickup segment in the US media after the premiere of the electric SUV Ocean.

By the way, the martial appearance of the Nikola Badger has not come out of the blue: The manufacturer has worked together with ‘Heavy D’, a pickup tuner that is known in the USA from the TV series Diesel Brothers. A marketing move to score with the electric pickup probably also with the diesel pickup affine fans of Heavy D.

Update 30 June 2020: Nikola is accepting advance orders for the Badger pickup truck against down payments of up to 5,000 US dollars. There are still only renderings of the car itself, the series version will be officially presented in December 2020. Nikola continues the double strategy of its trucks with the pickup and will offer both a BEV and FCEV version. As reported, production of the Badger is to start “2022 or earlier” via a joint venture with another car manufacturer, yet to be determined.