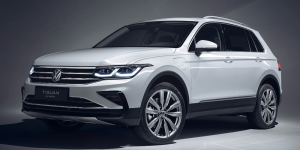 In the model update of the SUV bestseller Tiguan, VW is expanding its range of engines with a plug-in hybrid. This is the stronger of the two well-known PHEV variants. The revised Tiguan is now coming to market.

The new Tiguan is the next model after the Arteon and Touareg R that VW is offering as a plug-in hybrid for the first time. VW presented the current generation of plug-in hybrids in compact models last autumn with the Golf 8.

While the Golf 8 PHEV is offered in two versions with 150 and 180 kW system power, the Tiguan eHybrid will only be offered with the more powerful 180 kW PHEV. The Tiguan eHybrid will hold a 1.4-litre petrol engine producing 115 kW and the electric motor 85 kW. The 13 kWh battery will provide a WLTP range of 50 kilometres.

The plug-in hybrid is only available with front-wheel drive, but not in the four-wheel-drive version. The PHEV is also only offered in the standard Tiguan, but not in the slightly longer all-wheel-drive version. In addition, VW speaks of an “authentic SUV with a large towing capacity” in the press release but refers to the Tiguan with the two-litre diesel engine in the footnotes and makes no mention of the eHybrid’s towing capacity.

With the model update, some functions that VW had already introduced in other models will also be introduced. For example, the matrix LED light with 24 LEDs per headlamp, which is marketed by VW as IQ Light. Or the Travel Assist, which will be able to drive up to 210 km/h semi-autonomously in the future.

The German carmaker has not yet revealed the prices for the revised Tiguan and the eHybrid. Moreover, at the time of writing, it remained to be seen just when the PHEV will be available – in the footnote to the German press release, the Tiguan eHybrid is still referred to as a “near-series concept”. In Germany, VW dealers surveyed by the specialist website kfz-betrieb also point to a serious situation. Since the end of May, no more orders for the Tiguan have been possible, although the compact SUV was the best-selling model of the entire group with over 900,000 units last year.

The Wolfsburg-based carmaking giant is not focusing entirely on electrification. While a plug-in hybrid is the top model in the larger Touareg R series, VW intends to continue selling a Tiguan R in the future with a 235 kW petrol engine without any electric support.

Volkswagen has just opened the order books for UK customers to buy the Tiguan eHybrid. Priced from £35,515 in Life trim, it is the latest PHEV to join the VW range on the Isles. The carmaker claims an electric range of 30 miles for the model despite the battery being smaller at 10 kW and not 13 kW as initially specified.

The other performance data largely remained as described above. The eHybrid drivetrain combines a 1.4-litre petrol engine and an electric motor, resulting in a peak system output of 180 kW as expected. All three trims, Life, Elegance, and sporty R-Line trims, feature the same drive system with VW claiming respective WLTP CO2 emissions of 38, 43 and 41 g/km.

The Life, starting at £35,515 OTR, also boasts a low P11D price of £35,460, and BIK taxation rate of only 11%, while the other trim levels represent similar value, especially to fleet customers, with respective BIK taxation rates of 13% and 11% for the Elegance and R-Line.

The Tiguan eHybrid always starts in all-electric E-MODE. The PHEV can drive electrically at speeds of up to 80 mph, making it suitable for all types of UK roads. The top speed is 127 mph.

Including reporting from Sebastian Schaal, Germany, and Nora Manthey, UK.

Ford opens orders for the Mustang Mach-E in the USA