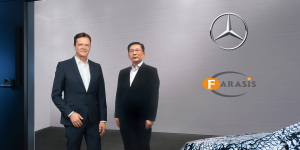 Mercedes-Benz has agreed a strategic partnership with the Chinese battery cell manufacturer Farasis Energy and is also taking a financial stake in the Ganzhou-based company. Farasis’ already planned plant in Bitterfeld-Wolfen will then primarily supply the German Mercedes plants.

After both companies concluded a sustainability partnership for battery cells in September 2019, the Stuttgart-based car manufacturer is now acquiring a stake of around three per cent in Farasis Energy with “a multi-million euro amount”. This gives Daimler the opportunity to nominate a representative for a seat on the battery cell manufacturer’s supervisory board. The investment is subject to any necessary regulatory approvals.

The logic behind the agreement: Mercedes-Benz receives a commitment to secure supplies of battery cells for the upcoming electric offensive, while Farasis receives planning security for capacity expansion. “With this agreement, we contribute our expertise in the field of battery cell development,” says Markus Schäfer, who is responsible for Group Research on the Board of Management of Daimler AG and acts as COO of the Mercedes-Benz Passenger Cars division. “At the same time, we are providing a boost for Farasis’s new plant and promoting the sustainable development of key technology and its establishment in Germany.” Incidentally, according to the Daimler announcement, Schäfer intends to take over the seat on the Farasis Supervisory Board.

In order to be able to meet the increasing demand for the German Mercedes-Benz plants in the future, Farasis is building a plant for battery cells in Bitterfeld-Wolfen and is expected to create up to 2,000 new jobs. According to earlier statements, a capacity of 6 GWh is to be reached from 2022, later 10 GWh are targeted.

Instead, the company repeats earlier statements that local battery production is an important factor in the success of the electrical offensive. By this, however, Daimler primarily means battery assembly plants where purchased cells are assembled into modules and ready-to-install packs. This “global battery production network” will in the future consist of nine factories at seven locations on three continents – in Germany, for example, this is to take place in Kamenz.

The battery cells from Farasis could soon be followed by other components that Daimler procures from Chinese companies. China board member Hubertus Troska announces that the company’s first-time participation in a Chinese battery cell manufacturer is intended to “further leverage the potential of advanced technology partners in the market, enabling us to pursue our electric strategy globally. In the future, we will continue to strengthen our activities in research and development, production and purchasing in China,” Troska said.