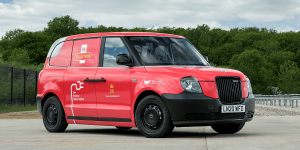 Royal Mail is testing a prototype version of LEVC’s new range-extender electric van, the VN5. The postal service is one of 25 businesses taking part in the British trial, which will last until Q4.

The Geely-owned LEVC, which also makes black cabs under the name TX, is deploying a fleet of converted TX-based prototypes, kickstarting trials ahead of official VN5 launch later this year. The electric van too follows the previous LECV naming system as VN is for Van (and TX for the taxi). In both cases, the 5 indicates the five cubic metre load or interior space. In the case of the van version, this translates into two Euro sized pallets with a gross payload of more than 800kg.

For Royal Mail, it is another step into electric terrain that the British postal service had been slow to make. DPD was LEVC’s first customer in the VN5 test. However, Paul Gatti, Fleet Director at Royal Mail explained “this trial is part of a programme of initiatives,” all designed to experiment with low-emission technology, while enabling the company “to continue to deliver letters and parcels safely, efficiently and responsibly”. One such a programme is running in London, where Royal Mail operates an 87-strong fleet of electric delivery vans. The vehicles are a mixture of the Mercedes-Benz eVito and Peugeot Partner Electric models as reported.

LEVC’s prototypes for Royal Mail will come in the postal services typical red and “be used on routes that will test the vehicle’s ability to the full,” according to Joerg Hofmann, LEVC CEO. The executive considers these trials “crucial to the final development of the van, ahead of its launch later this year”.

LEVC’s test phase will take place over the next few months. Other participants come from a wide range of sectors, including Tool & Equipment hire to Energy suppliers. LEVC says it selected these companies specifically to put the electric vehicle through a variety of different use cases.

Since the VN5 is based on the TX5, LEVC’s electric cab, it has the same small turning circle, which should help in urban logistics. Battery-powered, the van has a claimed electric range of 102 kilometres, and with the LEVC-typical range extender called eCity, the total range increases to 485 kilometres. Whether this will hold in van operation remains to be seen.

LEVC aims for production to start in Anstry near Coventry in the fourth quarter of 2020. The company expects the electric van to account for around 70 per cent of the plant’s annual production capacity of 20,000 electric vehicles.